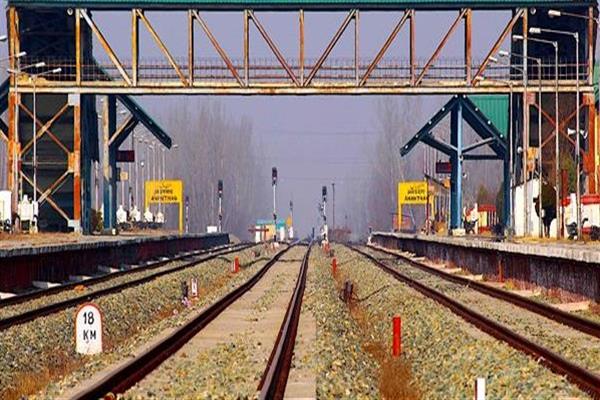 Excelsior Correspondent
SRINAGAR, Nov 29: In a significant move that will take the train connectivity to the border town of Kupwara, the Central Government has approved Railway link between Baramulla and Kupwara.
The Railway line will be the extension of Udhampur-Srinagar-Baramulla rail link up to Kupwara in North Kashmir.
“I am glad to inform you that Railways has prioritised the extension of rail link from Baramulla to Kupwara and has sanctioned an updated survey for the new link,” Anil Srivastava, Advisor, Transport, NITI Aayog said in his communication to Chief Secretary B V R Subrahmanyam.
According to the communication, the Baramulla-Kupwara rail link project would be taken up under umbrella work by the Railways.
An official statement said that the demand for extension of rail link from Baramulla to Kupwara was forcefully projected by the Governor’s Administration before NITI Aayog CEO, Amitabh Kant during his visit to Baramulla and Kupwara districts last month.
Subrahmanyam said the Governor’s Administration has also made a strong case for the Jammu-Rajouri-Poonch rail link and is expecting significant forward movement on this important connectivity project soon.
Former Chief Minister Mehbooba Mufti has congratulated people of Kupwara for the rail link. “Congratulations to people of Kupwara , as the railway link from Baramulla to Kupwara finally approved, hope soon Chenab valley and Pir Panchal too will get connected by train”, She tweeted.
The work on Katra-Banihal sector of the Udhampur-Srinagar-Baramulla rail link is still in progress as it passes through very difficult terrain.
It has several tunnels and the world’s highest bridge on the river Chenab in Reasi district. The iconic bridge will soar 359 metres above the bed of the river Chenab and will be 30 metres higher than the iconic Eiffel Tower in Paris. The bridge forms the crucial link in the 111-km stretch between Katra and Banihal. The bridge that is 1.3 km long is being constructed at a cost of Rs 1250 crore and will be ready next year.
The Banihal to Baramulla stretch of the Railway is most popular. Everyday around 15 pair of trains move on the 134.76-km-stretch from Banihal to Baramulla carrying over 30, 000 passengers daily.
The train to Kupwara will not only benefit the locals but also thousands of troops who are deployed in the border district and along the Line of Control (LoC).