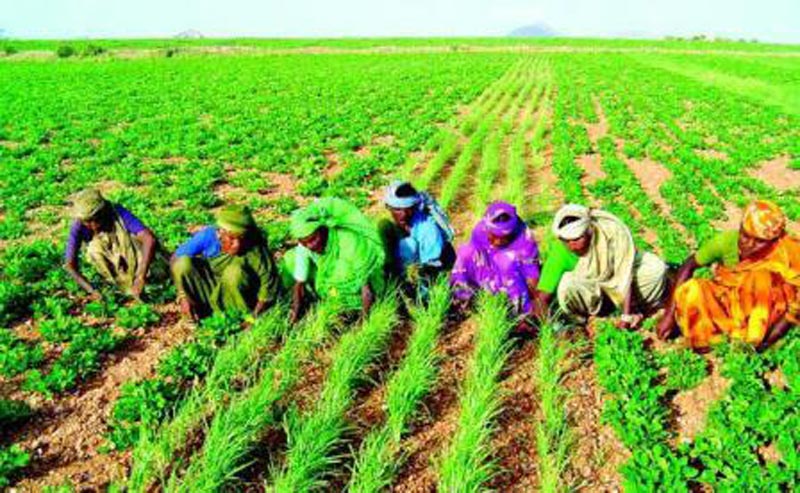 Avtar Bhat
JAMMU, Sept 13: Though announced over three years back, the Central Government’s much talked about schemes regarding doubling the farmers’ income by 2022 have proved a non starter in Jammu and Kashmir State due to official apathy and bureaucratic procedural delay.
According to sources, 10 schemes were started in the year 2015 by Prime Minister Narendra Modi for Agriculture, Horticulture and allied sectors with the objective to change the fate of farming community in the country by doubling their income by 2022, but these schemes have not seen light of the day in the border State of J&K so far.
Sources said to change the farmers’ fate in the country, Narendra Modi launched 10 schemes which included Pradhan Mantri Krishi Senchayi Yojna, (PMKSY), National Mission for Bamboo, Rashtri Krishi Vikas Yojna, (RKVY), Mission for Integrated Development for Horticulture (MIDH), Submission for National Agriculture Mechanization (SNAM) etc. In rest of the country, the two installments of Central funding for these schemes have been released while the third one is due in next some months but J&K has not even got the first installment of funds due to procedural delays at bureaucratic level in submission of the projects, sources added.
Sources said such kind of official apathy has generated a lot of resentment in the farming community in the State especially the Basmati, Paddy, Wheat, Maize , vegetable growers and those dealing with horticulture. Though these farmers have pinned high hopes on the Union Government which has launched a national mission for doubling their income by 2022 considering farmers as the back bone of Indian economy, the farming community presently feels disgusted and disturbed as the schemes proved non starter in the State during last three years.
Sources said by now like the other states of the country two installments should have been released in J&K also but the authorities in the State have not shown any interest in submitting the projects to the Union Government which resulted in delaying release of funds by Centre under the schemes.
Sources said that under the Union Government schemes, 100 percent funding will be given for public projects while 50 percent funding will be available for private projects launched for farmers welfare schemes to increase their Gross Domestic Product (GDP).
Moreover, under these schemes GoI wants overall development of agriculture, horticulture and allied sectors like seed technology, research, extension programmes and trainings to farmers etc, sources said, adding that J&K has nothing to boast of in this regard as no headway has been made in implementing these schemes so far.
Sources said Centre has fixed a ceiling of Rs 16 crore for a project and the Government has to submit a project for this amount to be sanctioned by Union Government. But much to the chagrin of the farmers the State level Steering Committee meeting of RKVY has not been held so far with the result the first installment of the Central assistance has not been released till date.
Sources said the performance of neighbouring Himachal Pradesh and Punjab were very excellent so far framing of projects under such schemes is concerned and they got first installment of Central assistance in March and second in August this year and now they are preparing for third installment while in J&K State the detailed project reports are delayed and some Nodal Officers appointed for various schemes are not concerned to hold the State level meetings. Moreover, the Finance Department is also sleeping over the files and not releasing the funds for some schemes which were received by it from Centre for reasons best known to the Departmental authorities, sources added.
Sources said under PMKSY the Prime Minster’s slogan is “per drop more crop”, “Har Khet Ko Pani” (Irrigation to every field). Though the scheme started in 2015 no money has been sanctioned under it for the State till date because the State Government failed to produce the utilization certificate to Centre. Same is the case with Micro Irrigation Scheme. It was not submitted in time and hence release of funds was delayed, sources added.
Sources said this procedural delay has created a confusion among farmers and they pose a question that what was the fun of announcing such schemes if they were not to be implemented on ground.
Sources said that under MIDH lot of money has been earmarked by the Union Government for promotion and boosting of horticulture products , but all these schemes are Kashmir centric and Jammu has not been given any priority under it despite the fact that this region has a lot of potential in growing mangoes, Guava etc.
President J&K Kissan Council and progressive farmer , Tejinder Singh said under Prime Minister’s Development Programme the money has been earmarked for Agriculture and Horticulture and allied sectors by Government of India and the GOI should maintain Check and Balance on the same otherwise these schemes will prove a failure.
When contacted Commissioner Secretary, Agriculture & Horticulture, Manzoor Ahmed Lone said there is no delay and schemes sanctioned by Union Government will not get hampered due to late release of funds or submission of projects.
He said he is convening the meeting soon in this regard and before submitting the projects under various schemes there are two level committees which have to vet the same prior their submission to Centre.
However a senior officer in the Department while admitting that the first installment of money has not been released so far due to non holding of meeting by State Level Sanction Committee, said that the efforts are underway to hold the meeting as soon as possible. He said for some schemes funds have been released by Central Government but have been kept withheld by the Finance Department and hopefully they may release the same soon.