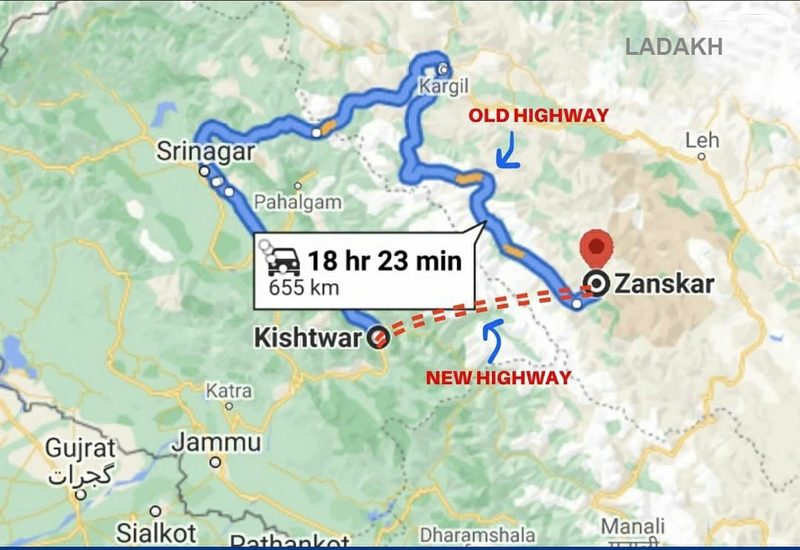 Journey between Jammu- Padum to be reduced to 10 hrs

JAMMU, Nov 26: It is good news for the people from Gulabgarh-Paddar Sub Division in Kishtwar district of Jammu region and the inhabitants from remotest and snowbound Zanskar Sub Division of Ladakh as the Union Government has announced to construct a new highway from Paddar (Kishtwar) to Padum Sub Divisional headquarters of Zanskar to have direct connectivity with Kargil district.
With this, the route discovered by the great Dogra warrior, Gen Zorawar Singh and the brave Army of Maharaja Gulab Singh, to conquer Ladakh and Tibet (Now under China), is going to become reality soon. Moreover, this road will connect the major pilgrimage centre of Mata Machail in Paddar area of district Kishtwar, where thousands of pilgrims visit during annual Yatra in August every year.
Official sources told the Excelsior that this road attained prominence and got green nod from the Union Ministry of Road Transport and Highways as the Ministry of Defence exerted pressure to have the safest and direct short link to Kargil and Drass sectors along the Line of Control and also to China border from the Northern Command Headquarters at Udhampur via Doda and Kishtwar districts.
“While the distance between Kargil and Zanskar is nearly 231 km and it takes over 18 hours and 30 minutes (nearly two days) to reach Zanskar from Jammu via Srinagar, it will be hardly 10 hours journey from Jammu to Padum Sub Divisional headquarters in Zanskar via Kishtwar and Paddar and just 9 hours from Udhampur Command Headquarters, when this highway will be made operational. Moreover, as per defence point of view, this internal route will be more safest to rush defence supplies to Drass and Kargil sectors besides, China borders,” the sources added.
“From Paddar Sub Division in Kishtwar, there is direct link to Pangi Valley in Himachal via Killar to Kelong, which can provide inter-connectivity with Chandigarh-Manali-Leh Highway, which is now all weather road due to commissioning of Rohtang Tunnel recently by Prime Minister Narendra Modi. Since this Government is focusing more on strengthening defence infrastructure in J&K and Ladakh after some recent developments along China borders, it has kept this road on top priority among other additional seven new highways approved by Union Government just two days ago,” the sources maintained.
They further added that this proposal was also mooted during Kargil war as Pakistani troops controlling heights, were targeting our Army convoy moving from Srinagar to Kargil in Gumri and Drass areas. A survey was also conducted during that time by two teams of Army and BRO. The then Union MoS for Defence, Prof Chaman Lal Gupta was also keen to have this road project cleared but due to paucity of funds as projected that time, the project could not be cleared.
Deputy Commissioner, Kishtwar Ashok Sharma when contacted said that this project has formally been announced by the Union Minister for Road Transport and Highways, Nitin Gadkari during his latest visit to Doda. The people of the area have widely applauded the announcement. With this a very old demand of the people from remote Paddar Sub Division in Kishtwar will be fulfilled. The proposal for this road had already been sent to the Union Govt from the district, he added.
SDM, Paddar-Gulabgarh, Varunjeet Singh Charak said new highway from Paddar to Zanskar is proposed via Masu-Chashoti-Machail Mata and Hakshu to Padum in Zanskar Sub Division of Kargil district in Ladakh. There is also a proposal of a tunnel on this route. There are about 6-7 villages of Buddhists in Paddar mostly bordering Zansakar/ Ladakh. They have their relations in Ladakh and they use on-foot route. If one leaves from Paddar on foot during early morning, he can reach Zanskar during evening. He said the distance between Paddar and Zanskar is hardly 60 kms and it will be further reduced, if tunnel is constructed ahead of Machail or Sumcham area where Sapphire mines are located.
Charak further disclosed that a road project from Atholi (Paddar) to Machail Mata under PMGSY is already in progress and out of 32 kms, 16 kms road has been completed. But new road will be of highway specifications and this is just 3 mts wide blacktopped. He said a population of over 30,000 from Paddar Sub Division besides people from entire Kishtwar-Doda belt, adjoining Himachal, Zanskar-Kargil and Defence forces will be mainly benefitted with this highway.
A social activist Kartar Singh Rathore from Gulabgarh-Paddar said many Budhists people from the villages like Luseni, Halo, Hanjo, Sumcham etc in Paddar along Ladakh border have relations in Zanskar area. Basically, they have come from Ladakh side and settled here. They usually move on foot and reach there the same day via Sumcham and Umsila Glacier. There is big glacier and two lakes in that belt. Many foreign tourists from Ladakh side visit Sumcham and Balnaz Tourist destinations.
Rathore further said this new road will expose this remote Paddar and Zanskar areas to the international tourists. There are two large lakes on those heights and there are large green meadows. There is lot of scope of tourism in the belt. The Sapphire mines also fall on this route and there is scope of launching extraction vigorously in these mines. But there will be big relief to the people travelling between Zanskar – Kargil and Kishtwar-Doda Ramban belts of Jammu besides parts of adjoining Himachal areas. He said ahead of Machail, the entire area is snowbound, and there is urgent need to have at least 5-6 kms long tunnel.
Project Director, NHAI, Udhampur-Ramban Sector, PK Phonsa said the project has been announced as a part of additional projects. The process of preparing DPR is likely to start shortly after winters. The entire Paddar belt remains snow covered during harsh winters and for success of this route there will be the need of a tunnel to provide all weather connectivity. He termed this highway project as most crucial as per defence point of view.