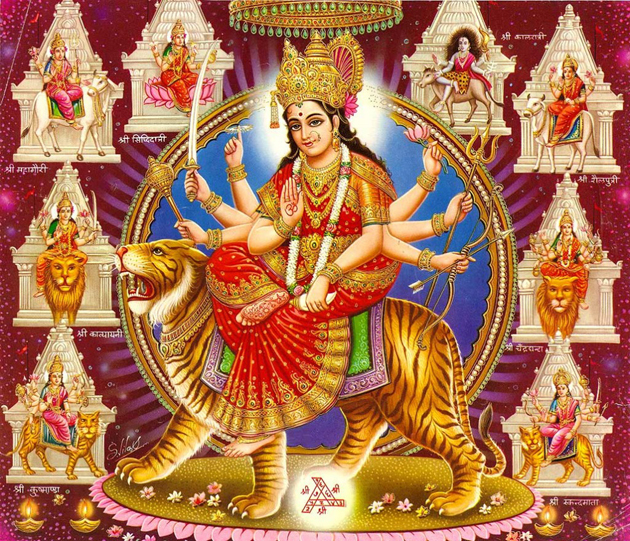 Chaitra Navratri is an important Hindu    festival that is celebrated over a period of nine days. The festivities begin from the ‘pratipada’ (1st day) till the ‘navami’ (9th day) of the Shukla Paksha (the bright       fortnight of moon) during the Hindu month of ‘Chaitra’, which is also the first month      of the Hindu calendar and hence the name, Chaitra Navratri.
According to the English calendar it falls during the months between March-April. Chaitra Navratri is also known as ‘Vasanta Navratri’ or ‘Rama Navratri’ as the ninth day of the Navratri festivity is celebrated as the birthday of Lord Rama. During the Chaitra Navratri the nine days are dedicated to worshipping the nine forms of Goddess Shakti and most of the rituals and customs are same as followed during the ‘Shardiya Navratri’.
According to the Hindu Puranas and scriptures, Chaitra Navratri was the most important Navratri in which Goddess Shakti was worshipped, until Lord Rama worshipped Goddess Durga in the ‘Ashwin’ month during the Ramayana war. Chaitra Navratri is celebrated with immense pomp and show in whole of India, especially the northern states. This Hindu festival is very popular in Himachal Pradesh, Haryana, Punjab, Madhya Pradesh, Uttar Pradesh and Uttarakhand to name a few. In most of these states, a huge fair is organised in the Shakti temples. In the state of Maharashtra it begins with ‘Gudi Padwa’ whereas in southern states like Andhra Pradesh, the celebrations kick start with ‘Ugadi’.
Rituals during Chaitra Navratri
Praying and fasting marks the Chaitra Navratri celebrations. Before the start of the celebrations, the house is cleaned  to welcome the Goddess in their home. The devotees performing the puja observe a fast for all nine days. While fasting only ‘satvik’ food like potatoes, ‘kuttu ka aata’, curd and fruits are allowed. Consumption of non-vegetarian food and also use of onion and garlic should be strictly avoided. During the Navratri period, while maintaining strict discipline in food, a person should also monitor his behaviour. The devotees spend their day in worshipping the Goddess and chanting the Navratri mantras. The fast is broken on the ninth day after the ‘havan’ and the Prasad, after offering to the Goddess, is eaten along with other members of the family.
As during the Navratri time, Goddess Shakti manifests herself in three forms, namely, Goddess Durga, Lakshmi and Saraswati, the puja rituals of Navratri are also categorised in set of three days, with each set dedicated to a particular Goddess. The first three days of Chaitra Navratri are dedicated to Maa Durga, the Goddess of energy, on the next three days, Maa Lakshmi, the Goddess of wealth, is worshipped and the last three days are devoted to Maa Saraswati, the Goddess of Knowledge. The puja rituals of each of the nine days of Chaitra Navratri are given below:
Day 1 – Pratipada:  this day the rituals performed are ‘Ghatasthapana’, ‘Chandra Darshan’ and ‘Shilputri Puja.
Day 2 – Dwitiya : the rituals of the day are ‘Sindhara Dooj’ and ‘Brahmacharini Puja’.
Day 3 – Teej : This day is celebrated as ‘Gauri Teej’ or ‘Sauhagya Teej’ and the main ritual of the day is ‘Chandraghanta Puja’.
Day 4 – Chaturthi: Also known as ‘Varad Vinayaka Chauth’, on this day the devotees observe the ‘Kushmanda Puja’.
Day 5 – Panchami : This day is also referred as ‘Lakshmi Panchami’ and main puja observed on this day are ‘Naag Puja’ and ‘Skandamata Puja’.
Day 6 – Shashthi: It is known as ‘Yamuna Chath’ or ‘Skanda Sasthi’ and puja observed is ‘Katyayani Puja’.
Day 7 – Saptami : This day is celebrated as ‘Maha Saptami’ and the ‘Kalratri Puja’ is performed to invoke the blessings of the Goddess.
Day 8 – Ashtami : It is the main day of ‘Durga Ashtami’ and is also called as ‘Annapurna Ashtami’. On this day ‘Mahagauri Puja’ and ‘Sandhi Puja’ are performed.
Day 9 – Navami : The last day of the Navratri festivity is observed as ‘Rama Navami’ and on this day the ‘Siddhidatri Maha Puja’ is performed.
Even though Chaitra Navratri is a 9-day festival, the celebrations come to an end on the day of ‘dashami’ (10th day). This day is known as ‘Navratri Parana’ and devotees bid farewell to the Goddess Durga, and pray for Her return soon, next year.
Significance of Chaitra Navratri
Chaitra Navratri is the most significant festival of Hindus. During this time, devotees worship Maa Durga, the Goddess of cosmic powers, to be blessed by Her divine benediction. It is believed that if devotees worship Goddess Durga without any desires to be fulfilled, they will attain salvation. Chaitra Navratri also marks the onset of the summer season and is observed when the Mother Nature undergoes a major climatic change. It is popular belief that by observing a vrat (fast) during the Chaitra Navratri the body is prepared for ensuing summer season.
Courtesy : http://www.prokerala.com/festivals/chaitra-navratri.html