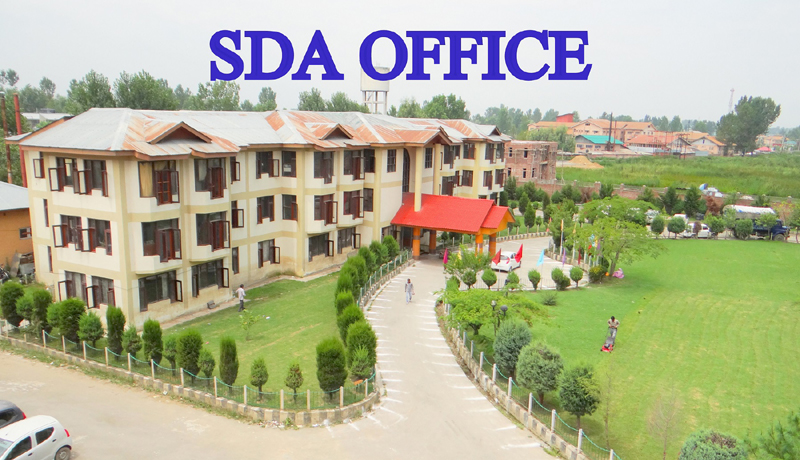 Excelsior Correspondent
SRINAGAR, Oct 22: As the Srinagar Development Authority (SDA) has failed to recover premium and rentals worth crores of rupees from the occupants and tenants in Sangarmaal Complex situated in heart of Srinagar City, the State High Court today sought response from the Authority over the issue.
The Court sought response from Srinagar Development Authority (SDA) to the plea alleging its failure of receiving full payment of premium and rentals from the occupants and tenants in Sangarmaal Complex situated in heart of Srinagar City.
The Peoples Forum (NGO) has filed a petition alleging a big scam in SDA with regard to failure of recovery of full payment of premium (Nazrana) and rentals from more than 80 business houses and shopkeepers who are in occupation of spaces in Sangarmaal shopping complex.
The PF submitted that it contacted the officials of SDA in order to ascertain as to whether all the steps and formalities have been followed by more than 80 business houses/shopkeepers who are in use and occupation of space in Sangarmaal shopping complex spread to over 33700 Sft.
It was shocking to know, petitioner organization submitted, that most of the business houses in use of the occupation of the space have not even made full payment of premium (Nazrana) as fixed by SDA despite the lapse of about 9 years from the date spaces came to be occupied.
“It was also surprising to know that SDA has not so far executed any lease agreement with any of the occupants despite the lapse of about 9 years and allows the occupants of enjoy the State property as if it has been granted to them in charity. More surprising fact is that the agreed rent is also not being paid by the occupants to SDA. The allotment of spaces in the City Centre is thus a big scam”, read the petition.
It may be mentioned here that SDA had invested a huge construction cost for Sangarmaal Complex and SDA is utilizing the same in discharging of the public interest. The legitimate obligation of SDA is not only to construct the business spaces but also regulate the income generating process in a legal and transparent manner.
The SDA, petitioner organization, submitted has constructed several shopping malls and complexes in Srinagar and the spaces stand allotted to various types of people having completed in the allotment bids. Among these complexes ‘Sangarmaal’ is a mega project constructed by the SDA.
The petitioner mentioned that it has sufficient reasons to infer that the authorities of SDA are hand in glove with the occupants of Sangarmaal complex and are not taking steps either with regard to recovery of premium (Nazrana) amount, rent amount or to execute lease hold agreements with the occupants and tenants as is mandated by law and are being allowed virtually to grab the public property with active connivance of SDA.
Sangarmaal a shopping complex is on 15 Kanals of land in phase I and as per the information of the petitioner organization, the SDA after due auction notice and wider publicity to general public allotted 57 shops, 10 Kiosks, 2 food courts and 5 office spaces and as payment of premium (Nazrana) as fixed by SDA, execution of lease hold agreement by the successful bidder in favour of the SDA and regular payment of rent by the successful allottee / occupant are some conditions to be fulfilled by and between the tenant/occupant and SDA.
Petitioner prayed that the court may intervene in the matter purely in public interest and may direct the SDA to place before the court the entire record with regard to the allotment spaces, payment of premium (Nazrana), and execution of deeds by the occupants of such spaces in ‘Sangarmaal Shopping Complex’.
“That upon perusal of documents and record regarding the said complex and discovery of defaults committed by the occupants in payment of Nazrana, agreed rent and non execution of lease agreements by the occupants the court may declare the entire process of allotment and occupation illegal or pass a direction for recovery of all dues as arrears of land revenue so that the said amount is used by SDA for welfare schemes with the jurisdiction of SDA”, the petitioners said.