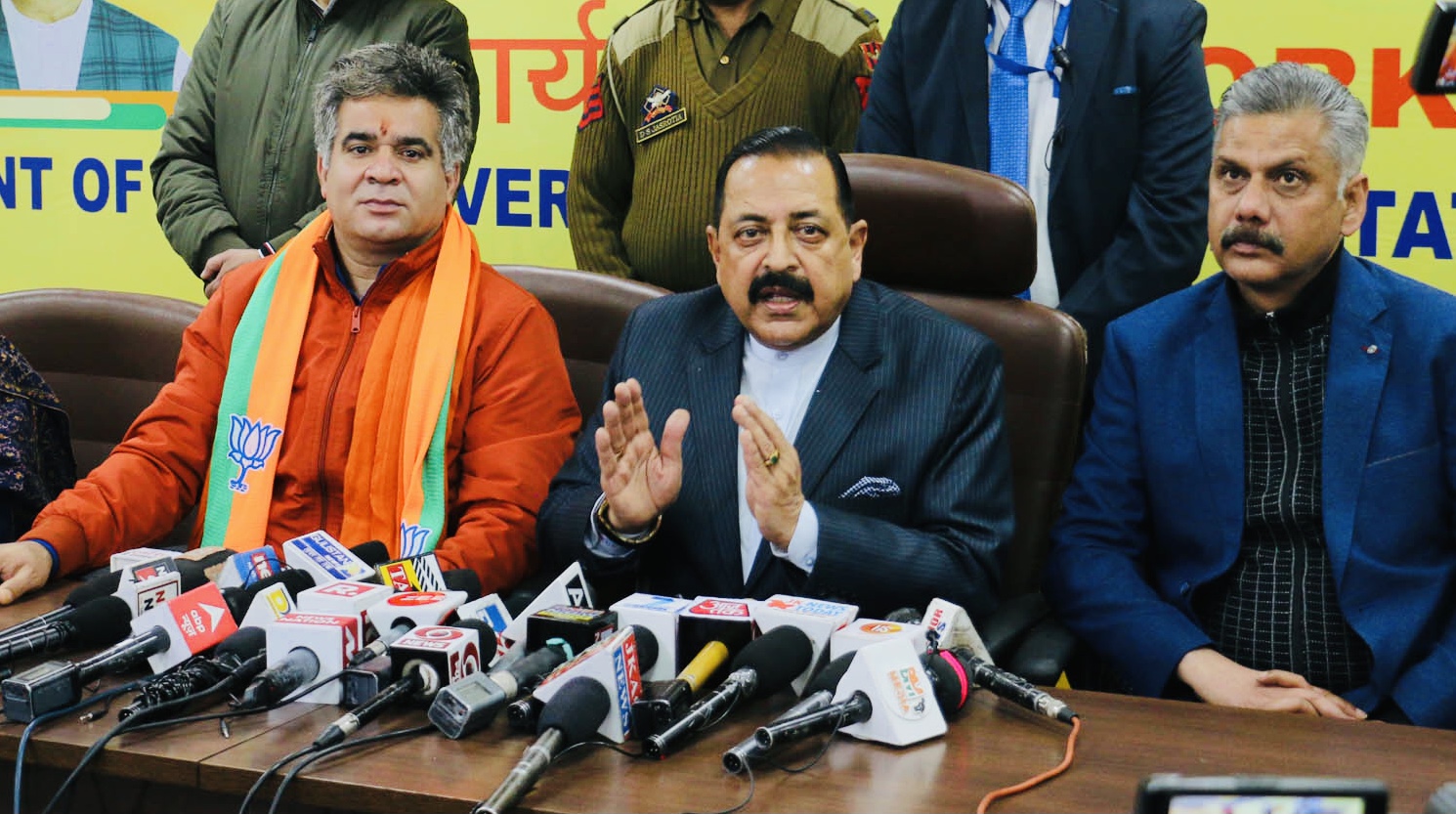 JAMMU, Feb 5 : Union Minister of State (Independent Charge) Science & Technology; Minister of State (Independent Charge) Earth Sciences; MoS PMO, Personnel, Public Grievances, Pensions, Atomic Energy and Space, Dr Jitendra Singh today said that Budget 2022 carves out a vital global role for India and seeks to usher India @75 into India @100.
Addressing an academic interaction on Budget 2022-23, organised by Bharatiya Janata Party (BJP) and attended by noted economists, intellectuals, prominent leaders of trade and business community as well as other stakeholders, Dr Jitendra Singh said, he has had the opportunity of being present at all the ten budgets presented by the Modi Govt including the Vote on Account presented by Arun Jaitley soon after this government came in 2014 and he can say with confidence that there has been a consistency in approach coupled with conviction and courage, and these three “Cs” have been common underlying determinants in every budget, whereas each successive budget has carried India forward closer to assume a global role.
Dr Jitendra Singh said , if in the Nehruvian years soon after independence India was a closed economy, in 1990s it bagan to open but Prime Minister has turned it into a dynamic, responsive, forward looking economy and particularly after Covid , the whole world has accepted this fact and is looking up to India.
The world today is ready to be led by us, said Dr Jitendra Singh, but the question is , are we ready to lead the world. And, Budget 2022 addresses this issue by seeking a leap forward for India through technology and innovation based economy which enriches itself by exploring India’s unexplored potentials including the deep sea resources, he added.
PM Modi has given us a statesmanly budget which addresses the next generation and not the next election and that is why, the critics and some sections of media are confused because they were anticipating election sops, said Dr Jitendra Singh.
The future economy is going to be the economy of ideas and the economy of imaginative innovation , said Dr Jitendra Singh and added, the Budget 2022 reflects futuristic vision of the Government headed by Narendra Modi visible in every initiative , whether it be Drone Shakti for StartUps, Kisan Drone 30% tax on virtual transfers, low carbon strategy etc.
To those who say there are no jobs accruing from the budget, Dr Jitendra Singh said, they are prisoners of government salary job. Giving some examples, he said, increase in Capital Expenditure to Rs 7.2 lakh crore itself will generate atleast Rs 3 lakh crore jobs while construction of 45,000 km highways worth over Rs 130,000 crore will also generate jobs.
Dr Jitendra Singh cited example of StartUp Boatlab youngsters who had been supported by his Ministry to put up Light Show during recent Beating Retreat ceremony and said the drones developed by them are going to be taken by Industry and that too is a source of income, possibly more than govt job. He said in Jammu region itself, the Ministries headed by him are supporting youth in Agriculture/Aroma and Dairy StartUps but unfortunately there is no awareness nor does the media report.
Referring to unexplored areas, Dr Jitendra Singh said, the allocation made in the union budget to Earth Sciences department was to the tune of Rs 2500 Cr that was in addition to 4000 crore already allocated to Deep Sea Mission . Elaborating further about unexplored potentials of the economy , he also made references to Deep Sea Mission and Space Missions to which the Government has given priority and that were neglected by previous governments.
Dr Jitendra Singh said, the Budget lays stress on chemical -free farming , sustainable start-ups startups, drone technology and various tech-based developments. He said that the Budget includes provisions for using drone technology in sectors like agriculture and Startups in form of ‘Kisan Drones’ , ‘Drone Shakti’ and Drone-as-a-service(DrAAS) . All these offer abundant opportunities for Job generation across sectors. He further maintained that sustainable startups were a major focus area of the Union Budget as it provides better opportunities than Government Jobs . He added that the Government endeavoured to build an economy of ideas , innovation and futuristic thinking wherein there is an abundance of job opportunities.
BJP President Ravinder Raina made the concluding remarks. Prof Dipanker Sen from Jammu University gave his expert comments while Prashant Jha made a power point presentation.