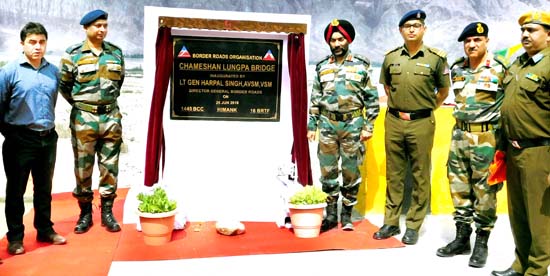 Excelsior Correspondent
SRINAGAR, June 25: Border Roads Organisation  (BRO) removed a major travelling bottleneck in Leh by constructing a 35-meter long Chameshan bridge, which will lead it to the base of Siachen glacier, the world’s highest battlefield.
Project Himank of the BRO undertook the challenge of successful accomplishment of constructing the  bridge on Khalsar-Sasoma road, an important axis connecting Nubra valley to Siachen Glacier base.
The bridge on Chameshan Lungpa Nala ahead of Sumur village whose completion by Project Himank in a limited working window, has been feasible due to meticulous planning, timely mobilization and innovative employment of resources.
The BRO spokesman said the increase in flow in Chameshan Lungpa Nala during summers and the movement of large volume of both tourist and military traffic over the existing temporary Bailey bridge provided limited connectivity on road Khalsar-Sasoma.
“The limitation has been overcome after engineers and personal of 1445 BCC  (16 BRTF) build the bridge, which is the first among series of seven bridges to be constructed on the road Khalsar-Sasoma. It has provided a major relief by improving the trafficability for movement of local villagers and military personnel besides tourist going to the scenic Panamik village,”  he said.
The bridge was inaugurated by Lt Gen Harpal Singh, Director General Border Roads, today and was declared open for use by security forces and civilians of Leh-Ladakh region.
General Singh, who is on a week-long visit to the Ladakh sector, addressed the officers and subordinates of Project Himank and appreciated them for their grit and determination while maintaining these highest and most difficult roads.
DG BRO  said that the successful completion of this bridge is a feather in the cap of BRO and emphasized that other bridges on the road Khalsar-Sasoma upto Siachen Base Camp must also be completed on priority  to provide better mobility  of the troops in the sector .
The General was briefed by Chief Engineer  Project Himank , Brigadier Nitin K Sharma about  various important and challenging  tasks undertaken by the project  to ensure give better connectivity  in Ladakh sector.