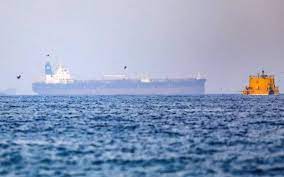 Fujairah (UAE), Aug 4:The British navy says the hijackers who boarded a vessel off the coast of the United Arab Emirates in the Gulf of Oman have left the targeted ship, without elaborating.
The notice on Wednesday came after the British military’s United Kingdom Maritime Trade Operations warned of a “potential hijack” under unclear circumstances underway the night before. The group reported that the “incident (is) complete.” It did not provide further details.
It was not immediately clear who was responsible for the attempted ship hijack, or what ship was targeted. Shipping authority Lloyd’s List and maritime intelligence firm Dryad Global had both identified the seized vessel as Panama-flagged asphalt tanker Asphalt Princess. The vessel’s owner, listed as Emirati free zone-based Glory International, could not immediately be reached for comment.
The event unfolded amid heightened tensions between Iran and the West over Tehran’s tattered nuclear deal with world powers and as commercial shipping in the region has found itself caught in the crosshairs. Most recently, the US, the UK and Israel have blamed Iran for a drone attack on an oil tanker off the coast of Oman that killed two people. Iran has denied involvement. (Agencies)