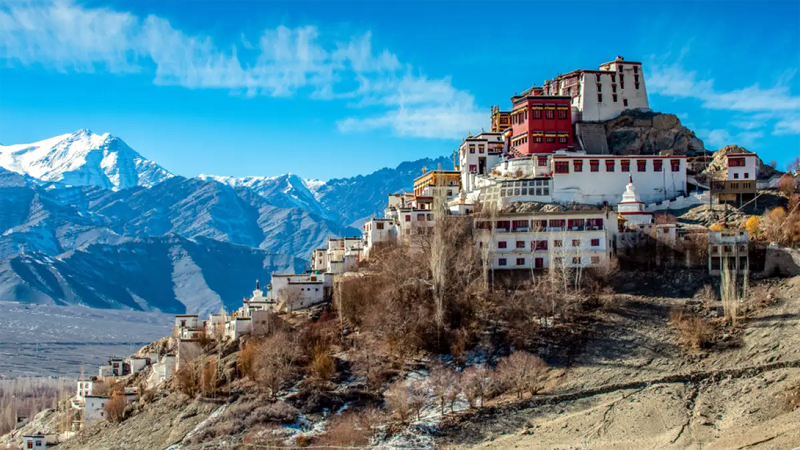 JAMMU, Jan 24: A breakthrough seems to be on cards in ending deadlock between the Union Home Ministry and protesting organizations of the Union Territory of Ladakh following contact established by the MHA emissary with Leh Apex Body (LAB) chairman and former Lok Sabha member Thupstan Chhewang after which it has been decided to alter composition of the High Powered Committee (HPC).
The LAB and KDA have also written a joint letter to Home Minister Amit Shah suggesting that, to begin with, dialogue should be initiated with two representatives each of LAB and Kargil Democratic Alliance (KDA) with the provision of wider participation as it makes headway.
Insiders told the Excelsior that following rejection of the HPC set up by the Union Home Ministry by both LAB and KDA and their joint protest in Jammu and call for dharna at Jantar Mantar in New Delhi, the MHA emissary established direct contact with LAB chairman and there were two to three rounds of telephonic talks with discussions centering around composition of the HPC and agenda outlined by the Home Ministry for dialogue.
“There has been a breakthrough to some extent,” the insiders said, adding after the talks the LAB and KDA are sending two names each from their bodies to the Union Home Ministry for inclusion in the HPC as against nine in the Committee announced earlier–five from LAB and four from KDA, the two bodies which are spearheading agitation in Ladakh in favour of their four-point agenda.
The letter sent to Amit Shah, a copy of which is in possession of the Excelsior, has been signed jointly by LAB chairman Thupstan Chhewang and vice chairman Tsering Dorjay Lakruk and KDA co-chairpersons Qamar Ali Akhoon and Asgar Ali Karbalai.
“We propose that two representatives each of the KDA and LAB are include in the dialogue to set its pace with the provision of wider participation as it makes headway,” the letter proposed.
Welcoming Shah’s concern for resolving issues regarding unique identity of Ladakh, the LAB and KDA leaders, in the letter, said: “We should proceed further in an unambiguous environment of mutual trust and goodwill which is possible only if we speak our heart out. We shall be failing in our conviction if we shut our eye to the disquiet prevailing among the masses with Ladakh in its present format having not been able to fully meet their expectations. This aspect has once again come to the fore after the constitution of a high-powered panel by you for dialogue”.
Endorsing the talks between Home Ministry and people of Ladakh, the two bodies admitted that this can be the only way for finding lasting solutions. However, they call for specific agenda and proper representation of the people saying nothing should be vague to go ahead with debate without attaching any pre-conditions about the course it takes or ought to take. They also called for constant and continuous dialogue.
They, however, said the discussions would be meaningful if the agenda includes four of their demands including full-fledged Statehood for Ladakh, Constitutional safeguards under the Sixth Schedule, recruitment and job reservation for local youth and establishment of an independent Public Service Commission and raising the number of Parliamentary constituencies to two from one at present.
“This means the HPC will be curtailed as earlier it has nine members from LAB and KDA,” the insiders said. However, they added that this will resolve the issue of inclusion of Tsewang Norboo in the Panel, who was mentioned as Ladakh Buddhist Association (LBA) Kargil president while the LAB and KDA say he doesn’t represent Buddhist Association.
“Most likely, the MHA could announce new HPC with fresh agenda,” sources pointed out and said this will be done to resume the talks between Centre and representatives of LAB and KDA.
The MHA has mandated the HPC to discuss measures to protect the Ladakh region’s unique culture and language taking into consideration its geographical location and strategic importance, ensure protection of land and employment for the people of Ladakh, discuss measures for inclusive development and employment generation and measures related to empowerment of Ladakh Autonomous Hill Development Councils (LAHDC) of Leh and Kargil.
As per the previous MHA order, the HPC headed by Union Minister of State for Home Nityanand Rai as Chairman will have Radha Krishna Mathur, Lieutenant Governor of Ladakh, Jamyang Tsering Namgyal, MP Ladakh, Chairpersons-cum-CECs of LAHDC Leh and Kargil, Joint Secretary, Department of Jammu, Kashmir and Ladakh Affairs in MHA, Director/ Deputy Secretary (Ladakh), Department of Jammu, Kashmir and Ladakh Affairs, MHA as Member Secretary and one nominated member from MHA.
The HPC had five members of LAB and four from KDA.
They include Thupstan Chhewang, Chairman LAB and president LBA, Nawang Rigzin Jora, former Minister and president, Territorial Congress Committee Ladakh, Ashraf Ali Barcha, president, Anjuman-e-Islamia; Shia body, Leh, Acharya Stanzin Wangtak, president, All Ladakh Gompa Association and Kushok Thiksey alias Nawang Chamba Stanzin alias Thiksey Rinpoche, Leh, all from LAB and Asgar Ali Karblai, co-chairman KDA and Working President Territorial Congress Committee, Ladakh, Qamar Ali Akhoon, co-chairman KDA and senior NC leader, Sajjad Kargili, social activist and representative, Islamia School Kargil and Tsewang Nurboo, president LBA Kargil.
Last year, both Autonomous Hill Development Councils of Leh and Kargil had passed separate resolutions seeking Sixth Schedule like status to Ladakh. Leh Council is headed by the BJP while NC is ruling the Council in Kargil.
The BJP is, however, averse to the demand of Statehood for Ladakh saying UT was the demand of Ladakhis for past several years which was fulfilled by the Union Government on August 5, 2019.
Worthwhile to mention here that Union Minister of State for Home Nityanand Rai had last met the joint delegation of Leh Apex Body and Kargil Democratic Alliance during his visit to Leh on August 29, 2021 during which he had assured that a Committee would be set up by the Home Ministry for talks with the two bodies of Leh and Kargil.