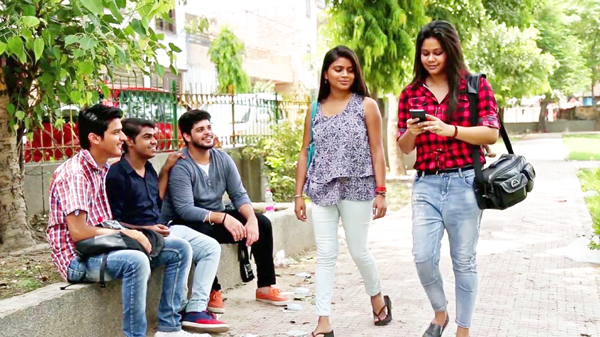 Despite many awareness programmes and campaigns, the continued rise in gender violence in the country is proving frustrating to sociologists and activists. Some suggest that including men in such programmes is vital. Ranjita Biswas gets introduced to one such initiative in Pune.
Commenting on the infamous groping and molestation incident in Bangaluru during the New Year’s Eve, India’s cricket icon Virat Kohli wondered why those ‘people’ standing around or witnessing the shameful incident didn’t protest. He even went on to say that “Those people have no right to call themselves men.”
Why doesn’t eve-teasing or body-shaming with crude remarks by roadside Romeos evoke outrage or protest from men who witness it regularly on Indian streets ?
Is it because this kind of behaviour by men has been internalised, dismissed as ‘boys will be boys’ as indulgently uttered by a well-known politician?
According to the National Family Health Survey (NFHS-3), every third Indian woman aged 15 to 49 years has experienced some kind of sexual or physical violence in her lifetime.
The need to curb this kind of harassment, many social behaviour experts feel, is to start young among boys so that they are sensitised about gender roles as they grow up and learn to question society’s imposition of ideas on so-called ‘girl-behaviour’ and ‘boy behaviour’.
True, activists and sociologists have been advocating programmes aimed at women empowerment, running sensitization programmes with the police and the judiciary. Bbut increasingly, there has been a realisation that men , personally and collectively, have to get involved to prevent violence against women. Yet, not many initiatives involve males.
Equal Community Foundation (ECF), an NGO in Pune, works among adolescent boys in slums and low-income areas through an innovative gender sensitisation programme. As they analyse the ‘problem’: there are 230 million boys in India under the age of 18. “If nothing changes, then as adults, 114 million (50%) might be violent: 79 million (34%) might commit sexual violence, including rape.”
ECF attempts to ‘change’ the behavioural scenario by tackling the issue at the grassroots because it believes, “Violence is not simply a biological or physical act. It is located within a specific social and cultural context. We can change that particular context.”
The idea of ECF germinated in 2009 at the Solar Cinema programme in which films are screened in community clubs, a government initiative in Maharashtra, to highlight social issues. It was observed that most of the viewers were adolescent boys though the films were aimed at women. Why not start here when there was already a captive audience? Hence the idea grew to hold interactive sessions in local community centres on easy to relate issues where boys ( ages 13-17) could join in after their school hours. The programme accordingly was launched in 2010 aiming at engaging the boys for a period of one and a half years through a three-phase curriculum. They even get a ‘graduation certificate’ after completion.
One such programme runs in Premnagar area of Pune. At the centre, as afternoon light cast shadows, in trooped a few boys of various heights, hair neatly combed and dresses neat too. They sat in a circle on the floor around their facilitator. They giggled as they played games and ribbed each other .Their ‘Sir’ behaved like one of them, joining in the game, chit-chatting. But he also asked probing questions quite casually to assess if the engagement had changed anything in their perception of a girl/woman’s role in the family and also, a boy/man’s.
‘Who does all the work at home?’ ‘sir’ asked.
‘Mother’, one of the boys answered.
‘Does she also work outside the house?’
‘Yes, as a bai -housemaid’.
‘Does your father help her’?
An emphatic ‘No’.
‘But do you?’
‘Today I swept the floor before leaving for school,” he said triumphantly.
These are apparently small changes, says Anjana Goswami of ECF but could have salutary effect when the boy grows up and he himself becomes a householder. The style of discourse, not like a lecture or even in a strict workshop style, is conceived so that the discrepancies in how women and men are treated at home/outside comes to the realisation of the participating boy.
ECF also monitors through discussions with mothers and sisters of the boys if the sensitisation effort has borne any fruit. The women, it claims, confess that they have seen a change in behaviour of their sons. “One said that her son and friends protested when another group of boys teased the girls in the locality while on way to school.”
Then there was this boy Asutosh who prevented his sister getting married at a young age, a norm in the community. She is now studying in a college.
Another boy intervened to prevent the ritual of ekadesi when his mother was going to fast the whole day, though she also worked outside and this could weaken her.
Some of the boys taking part in the sensitisation programme become mentors to other boys later after they cross their teens.
The effectiveness of the ECF’s high impact programmes has evinced interest of NGOs working with men in other states. At the moment ECF is partnering with NGOs in West Bengal. The aim is reach all parts of the country. (TWF)