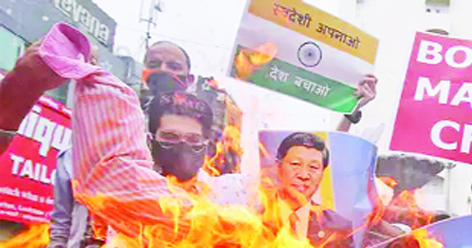 Medansh Thusoo
Today, we see that every second person is talking about ‘Boycott China’ and due to the recent incident which took place in which India lost its 20 brave sons, this topic of boycotting Chinese products has become a very sensational one. We see many big personalities and celebrities are talking about this agenda. In a developing economy like India where startups play an important role, majority of successful startups are being funded by Chinese companies. According to a report Chinese tech giants fund 92 Indian startups which include prominent names like Paytm, Byju’s, Oyo, Ola, Swiggy, Zomato, etc. In a country like India, where tech has a prominent position which means tech has a prominent position in India’s development, Chinese tech investors have spent about $4 billion into Indian startups which means China is developing its roots in India.
Since, it is not hidden from anyone that Chinese companies are directly under the control of Chinese Government, which implies that China is extending its influence in India. And if you are thinking that it is making an impact on India only, then you are wrong. China is extending its influence on other countries too for its aim of becoming a superpower and to establish a Chinese monopoly in the entire world.
Recently, a video got viral in which a Surat Residents was shown break China- made LCD TV to show their rage towards China, but the point is : does it really impact Chinese Economy? To answer this, I have made a point by point list which is as follows:
What is the fun in breaking a product for which you have already paid. By this I don’t mean that use Chinese goods, the point conveyed here is that thing which you have already purchased, why to destroy it because at the end of the day it is your money which is wasted. However, it has a lesson. If in future we go to buy a product we have two options. Either to buy that product at dirt cheap prices which is ‘Made in China’ or a little costlier one which is ‘Made in India’, without any thought we should prefer the second one.
If we go out for a walk, a common observation made by almost everyone is that usually an electronics’ shop is flooded by Oppo and Vivo posters and the shopkeepers even encourage you to buy it, And without any thought we buy it. The reason is that these brands have marketed their products so much that they have made a recall value in everyone’s mind. And according to a report, Chinese companies control 70% of India’s smartphone market.
And when it comes to Indian brands, they are left far behind these Chinese manufacturers because they don’t have apt technology to cater the demands of people. This is one of the major issues which is faced by Indian manufacturers.
China is heading towards its monopoly in the global markets by its dirty tactics. They have targeted many nations and have made a ‘Debt Trap’ in which the countries get stuck and eventually, the Chinese Government extends its control over that country.
And because of this ‘Debt Trap’ only, many African nations have to give their strategic points to China for trade and due to the same reason, China has acquired an important port of Sri Lanka which is very close to Indian coastline and without any interference by Sri Lankan Government China can use that port for its warfare strategies and without any questions by international bodies since China has taken that port on lease for 99 years.
A question must be arising that we have seen that Chinese goods are available at ‘dirt-cheap’ prices and also these products are imported which means it has custom duties also, after this also they are available at such rates which are cheaper than those which are manufactured locally. So, how do they do it?

A simple but an important reason behind it is that Chinese Government give subsidy to the manufacturers to make these products so cheap that these can destroy a nation’s local industry. Also, another important reason behind it is that they have used their massive population as their strength which implies that almost every household in China is a manufacturer. This is also a reason behind low quality of Chinese goods because almost everyone make these things at home without having proper equipment and skills and moreover Chinese government supports them thus they incur very less losses and more profit.
Solutions
* It is not hidden that China has export(in India) about a value of $17 billion and boycotting them completely would really – really matter to China. Some say that boycotting these goods won’t matter to China much as they have such global exports. But in my opinion I think that $17 billion ( 12,95,09,40,00,000 Indian Rupee) is not at all a small amount and it really matters. A recent tweet from Global Times which is a Chinese media house controlled by Communist Party Of China, tells that “India should curb ‘boycott China’ voices after border clashes”. This tweet clearly indicates that this boycott really matters to them.
So boycotting these products would really impact them but if we think rationally that a complete boycott isn’t at all possible because China has its involvement in almost every thing whether we talk about hardware or software.
So, simple solution could be that if we go to buy something, we should always prefer Indian goods even if it is a bit costlier.
* It is not that today we show our rage and after a few days we come back, we have to be consistent else the outcome could be very devastating.
* We shouldn’t show our rage by burning these goods because eventually it would be our loss.
* This boycott strategy by Indians is really appreciable but it should be practiced silently and we should start looking for substitutes for Chinese goods in the market.
* If we look at it deeply, we will find that this strategy is a very- very small step by us to empower our businesses, so to really make India ‘Atma Nirbhar’.
feedbackexcelsior@gmail.com