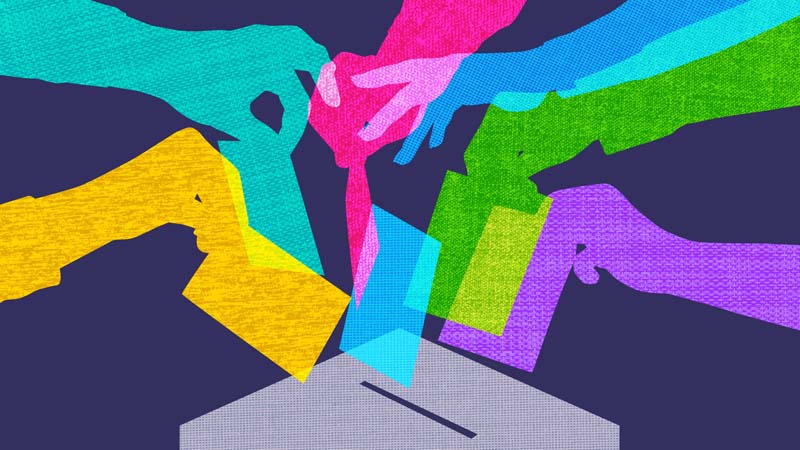 Avtar Bhat
KATHUA, Apr 18: To get rid of their decades long problem of displacement due to shelling from across the border denizens in Hiranagar Sector of Kathua-Udhampur Lok Sabha constituency which went to polls in second phase today voted for a strong Government at Delhi which can ensure a sense of security among them by giving a big blow to the enemy country.
People in entire border belt who cast their vote said that the security of nation is of paramount importance to them as they are fed up with displacements often faced by them due to border skirmishes.
“We are concerned for our security and safety as we suffer heavy losses due to the unprovoked shelling from across and have to leave our homes and hearths for security and safety”, said Monu Devi of Londi Hiranagar who had come to cast her vote at Polling Station No. 51 Londi which is hardly one km away from Zero Line.
Supporting her, Pardeep Kumar, a 12th class student and first time voter, who was standing in a long queue to cast his vote on this polling booth said they want a strong Prime Minister in the country who can ensure security to the people, protect unity and integrity of the country, weed out corruption and make India world’s super power.
Pardeep, who was all elated and jubilant to cast his vote for the first time said “the vote has given me the power to decide the future of my nation and strengthen the democratic setup of my country and I will definitely cast it in favour of that party and the candidate who fulfills my aspirations”.
Ankush Singh, also a first time voter of border belt, said that he will vote for development and strengthening democratic institutions in the country. He, while expressing his satisfaction over the development in the border belt, said that good roads have been constructed here and work is going on various bridges in the area. During last five years lot of development took place and to save people from shelling the individual as well as community bunkers have been constructed,. “Through my vote I want that this development process should continue”, he added.
At Kattal Brahmana, which is five kms away from IB, people were seen in two separate long queues one for male and another for female to cast their vote. The polling booth has 719 votes and 212 were polled by 11-30 am. However the rush of voters continued with large number of people entering the polling booth to wait for their turn to cast the vote.
The Election Commission had made elaborate security arrangements on polling booths in border belt where besides the local police security forces jawans were also deployed inside as well as outside the polling booths to avert any untoward incident.
The interesting thing in today’ s election was that at some places women voters had outnumbered the men in casting the vote and long queue of women were seen outside various polling stations in border belt of Hiranagar, Ghagwal as well as Kathua town and polling stations of Billawar constituency.
Such was enthusiasm among the women voters that at some places octogenarian ladies who with the help of their children came to polling stations to cast their vote by travelling about two kms to and fro. Mango Devi an 85 year old lady who was in a queue to cast her vote at Polling Station No. 15 Ghagwal said she will vote for the development of country so that the youth get employment and peace prevails every where. At this polling station out of 489 votes 127 people had cast their vote by 10 am.
People in entire belt had reached the Polling Stations 15 minutes ahead of voting which started at 7 am sharp and were waiting in long queues. The weather was also pleasant after yesterday’s rain showers which also gave a respite to voters who did not face any problem of heat while standing in queues.
At Polling Station No. 17 B Ghagwal people were seen in long queues in the morning. Meena Kumari a women voter said that she is in queue for 45 minutes and yet it will take her half an hour to reach inside the polling booth.
At Polling Station No. 130 Rajbagh, voters had to face problem as the EVM developed a snag and did not work for 45 minutes resulting into delay in polling. However, later it was restored and polling continued as per normal.