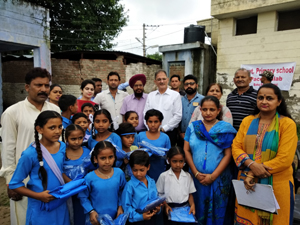 KATHUA, Aug 7: In a major success against smuggling of narcotics in the State, Border Police Post, Chadwal has recovered approximately 45 kilograms  of high grade Cannabis plant material (Charas) having market value of Rs. one crore approximately and arrested one person in this connection. Click here to watch video
While addressing media person Superintendent of Police, Kathua, Sridhar Patil said that a team of Police Post, Chadwal during vehicular checking on National Highway intercepted a car  No. DL4CAM- 4846 and recovered the contraband from vehicle and arrested the person Mohammad Zakir Sheikh, S/O Mohammad Ali Sheikh, R/O Noor Jahan Chawal, Road No. 10 near Tavera Hotel Hajuri Dargah, Thane,  Maharashtra. He was in the illegal possession of the contraband.
The SSP said the accused disclosed that the vehicle was coming from Jammu towards Pathankot. It was searched and contraband was recovered from special cavity. He added that the police is investigating the matter whether the consignment was smuggled from across the border i.e Pakistan or Afghanistan and how the nexus is operating in Kashmir and rest of the other states. It is also being ascertained that where it was going to be sold and smuggled.
He said it is being ascertained whether the similar modus operandi is adopted as the big consignment of Heroin worth Rs 250 crore was seized in Jammu yesterday. He said that it is also matter of investigation to expose the local narcotics smugglers active in the State.
A case under FIR No 192 under Section 8/20 NDPS Act has been registered and started investigation into the matter.