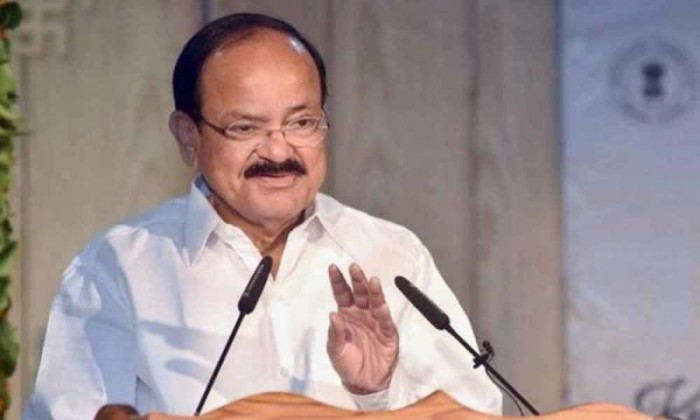 NEW DELHI, Aug 11: Asserting that the consistently high productivity of Rajya Sabha in recent times indicates “winds of change”, Vice President M Venkaiah Naidu on Tuesday stressed the need to ensure that Parliament and legislatures become more vibrant by raising the quality of debates and adopting a constructive approach.
The assertion by Naidu, who is also the Rajya Sabha Chairman, was made during the launch of a book chronicling his third year in the office of the vice president .
The book was launched by Defence Minister Rajnath Singh in the presence of Information and Broadcasting Minister Prakash Javadekar among others. Naidu completed three years in office on Tuesday. Before becoming the vice president, he was a Union minister. He had also been the national president of the Bharatiya Janata Party (BJP).
At the event, Singh said that if not for the pandemic, India could have been among the top three economies of the world in the next few years.
The defence minister said Naidu has always been desirous of a strong, self respecting and a prosperous India.
“How fortunate is our vice president, as during his tenure as vice president, under the leadership of Prime Minister Narendra Modi, India is becoming stronger, it has been successful in creating an image of a self respecting nation in the world and was also moving forward at a fast pace from the economic point of view,” the defence minister said.
“If this pandemic would not have come … In the coming years, maybe in seven to eight years, we would have succeeded in putting India among the top three economies of the world,” Singh said, adding that, “we are confident that India will move forward”. He said the prime minister has taken up the crisis situation as a challenge. He has also presented his roadmap for making India prosperous from the economic point of view.
In his remarks, Naidu said that during the last three years, Rajya Sabha passed a total 93 bills including several far reaching ones. He said 60 bills, amounting to 65 per cent of the total were passed during the last three sessions.
Naidu also said that the time spent on the deliberative functioning of the Rajya Sabha has been increasing, reaching a record high of 36 per cent of the total time of the House now as against 28 per cent during 2004-14. “I have commissioned an analysis of the functioning of Rajya Sabha since it came into being in 1952. This first of its kind effort led to some major revelations,” he said.
In the last 68 years, the governments of the day did not have majority in the Rajya Sabha for 39 years including the stretch of last 31 years, Naidu said. This statistic is important as the composition of the House has a bearing on its functioning, he asserted. The time spent on passing the government bills has remained almost the same over the years, Naidu said. However, the time spent on ensuring the accountability of the executive of the day through instruments including the Question Hour has shown a disturbing declining trend over the years, he said.
Of the last three years, Rajya Sabha functioned for one year under the shadow of elections in the run up to the general elections in 2019 and this impacted the functioning of the House showing in productivity of 28.90 per cent during the 245th session, 27.30 per cent during the 247th and a low of 6.80 per cent during the 248th session, he said.
“As a result, Rajya Sabha has clocked annual average productivity of 35.75 per cent during 2018, the lowest ever,” Naidu said. (PTI)
“However, I did not let my optimism desert me and persisted with my mission for change. I am happy to report that the House clocked productivity of 78.42 per cent during 2019, the best since 2010. The consistently high productivity during the last three sessions is a certain indication of winds of change,” he asserted.
The book, titled ‘Connecting, Communicating, Changing’, runs into more than 250 pages and has been brought out by the Publications Division of the Ministry of Information and Broadcasting.
Naidu said the productivity of the Upper House has been steadily declining over the last 25 years.
“To further illustrate this declining productivity, Rajya Sabha has clocked annual productivity of 100 per cent only once in 1999 during the last 20 years,” he said.
Since assuming the office of Chairman, Rajya Sabha, Naidu said he has presided over eight sessions beginning with the 244th and the average productivity of the House during this period comes to 65.50 per cent.
“Session-wise, four of the last eight sessions have clocked good productivity. It was 73 per cent during the 246th session; 104 per cent during 249th; 99 per cent during the historic 250th session and 76 per cent during the last 251st session,” Naidu said.
Dispelling the apprehensions voiced in the Constituent Assembly over the need for Rajya Sabha, this august institution has functioned as a constructive partner in legislating for the country’s transformation over the last seven decades, Naidu said.
“We need to ensure that our Parliament and legislatures become more vibrant and robust by raising the standards and quality of debates as also by adopting a constructive approach,” he said.
The electronic version of the book (e-book) was launched by Javadekar.
The book provides a glimpse of Naidu’s interactions with farmers, scientists, doctors, youth, administrators, industry leaders and artists, among others. (PTI)