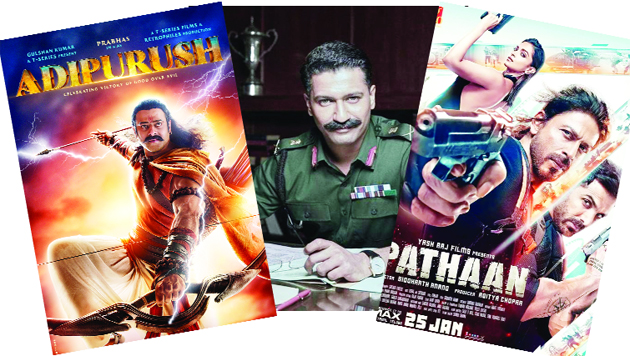 Amid the competition from the southern film industry, Bollywood is aiming high riding on big upcoming releases of top stars in a bid to reclaim the box office glory, which has taken a beating post pandemic. As the curtains draw on the year 2022. Souvik Ghosh lists some crucial Bollywood releases
Pathaan
After a hiatus from films for four years, Bollywood superstar Shah Rukh Khan is gearing up to treat the audience with his stardom in Siddharth Anand directorial Pathaan, which is slated for Jan 25, 2023 release. Cutting across the controversies over lead actor Deepika Padukone’s bikini colour, Shah Rukh’s abs, hairs and sizzling romance with the former has already set the social media buzzing.
Maidaan
Bollywood actor Ajay Devgn, who is credited for his meticulous character depiction on-screen, will play football coach Syed Abdul Rahim in Maidaan. Directed by Amit Sharma, the film is scheduled to release in February.
Kisi Ka Bhai Kisi Ki Jaan
After a topsy-turvy run in the box office in the last few years, Bollywood superstar Salman Khan is aiming to recreate his on-screen magic with action-comedy film Kisi Ka Bhai Kisi Ki Jaan. Directed by Farhad Samji and produced by Salman Khan Films, the film is expected to release in April 2023 on the occasion of Eid.
Rocky Aur Rani Ki Prem Kahani
Filmmaker Karan Johar and Dharma Productions are all set to bring an ensemble cast with their Rocky Aur Rani Ki Prem Kahani, which stars veterans Dharmendra, Jaya Bachchan, Shabana Azmi, actors Ranveer Singh and Alia Bhatt in the lead. Though the shooting was briefly postponed owing to Alia’s pregnancy, the film is expected to release in late April 2023.
Jawan
After Pathaan, Shah Rukh will be back on big screens for the second time in 2023 with Atlee’s Jawan, an action thriller featuring the 57-year-old actor in dual roles. The film co-stars Nayanthara, Vijay Sethupathi in key roles.
Adipurush
Adipurush is one of the 2023 films that has already created a buzz on social media. The film, which is based on epic Ramayana, features Prabhas, Kriti Sanon, Saif Ali Khan in the lead. Directed by Om Raut, the film is expected to release in the cinema halls in June.
Tiger 3
Bollywood superstars Salman Khan and Katrina Kaif will reunite for yet another sequel of the Tiger franchise, Tiger 3. Co-starring Emraan Hashmi, the Maneesh Sharma directorial film is slated to release in the last quarter of 2023.
Sam Bahadur
After Raazi, Bollywood actor Vicky Kaushal, whose essaying of iconic characters on-screen has garnered good reviews, has again joined hands with filmmaker Meghna Gulzar for Sam Bahadur. Vicky is set to portray the titular role in Sam Bahadur, which is based on the life of India’s first Field Marshal Sam Manekshaw. The shooting for the film, which is slated to release on Dec 1, 2023, has already concluded.
Bade Miyan Chote Miyan
Bollywood actor Akshay Kumar, who too has struggled to offer good box office numbers post pandemic, will reunite with action star Tiger Shroff in Ali Abbas Zafar’s Bade Miyan Chote Miyan, which is expected to hit the big screens in December.
Dunki
The year will not end without the third release of Shah Rukh Khan, who has joined hands with iconic filmmaker Rajkumar Hirani for the first time through Dunki. The film, which stars Taapsee Pannu alongside Shah Rukh, can be expected to be released on the big screens on Dec 22, 2023. (TWF)