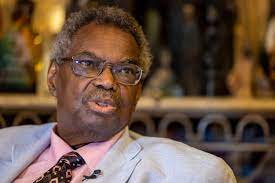 Montgomery, Oct 3: The invisible line dividing two of Alabama’s congressional districts slices through downtown Montgomery, near iconic sites from the civil rights movement.
On one side sits the church once led by the Rev Martin Luther King Jr. On the other is the spot where Rosa Parks was arrested helping to ignite the Montgomery Bus Boycott.
The state’s congressional boundaries are the subject of a high stakes case that will go before the US Supreme Court on Tuesday.
The plaintiffs contend that under the Voting Rights Act, Alabama is required to create a second congressional district in which Black voters make up a majority, or close to it.
African Americans are about 27 per cent of the state’s population but are the majority in just one of the state’s seven congressional districts.
“Our congressional map is not reflective of the population that lives in Alabama,” said Evan Milligan, 41, among voters and advocacy groups who filed the lawsuit challenging the district lines.
Milligan said it denies Black voters the opportunity to “elect an additional person that can really go to the mat on their interests,” citing issues ranging from generational poverty to the lack of internet service.
The lawsuit claims Alabama dilutes the voting strength of Black residents by packing a large number of them into a single district — the 7th, where 55 per cent of voters are Black — while fragmenting Black communities elsewhere. That limits their influence in the state’s other six districts.
A three-judge panel that included two appointees of President Donald Trump ruled unanimously in January that Alabama likely violated the Voting Rights Act by giving Black voters “less opportunity than other Alabamians to elect candidates of their choice to Congress.” The judges ordered lawmakers to draw new lines for this year’s election.
But in a 5-4 decision in February, the Supreme Court sided with Alabama and allowed this year’s congressional elections to take place without a change.
“This is just about getting Black voters, finally, in Alabama the opportunity to elect their candidates of choice. It’s not necessarily guaranteeing that they will have their candidate elected,” said Deuel Ross, who will be arguing the case as senior counsel at the NAACP Legal Defense and Educational Fund, which is representing the plaintiffs.
African Americans served in Alabama’s congressional delegation during Reconstruction. They did not return until 1993, a year after the courts ordered the state to reconfigure the 7th Congressional District into a majority-Black one, which has since been held by a succession of Black Democrats. That 1992 map is the basis for the one in use today.
Alabama maintains that courts, the Justice Department and even a legislature previously controlled by Democrats have blessed versions of the existing map for decades. Republican lawmakers and the Republican attorney general say the plaintiffs want to wrongly prioritize race above other redistricting principles such as keeping districts compact with like-minded communities.
“I think the Supreme Court is going to back us up that we complied with existing law,” said state Rep. Chris Pringle, a Mobile Republican and chairman of the legislative committee that drew the new lines.
Pringle said lawmakers prioritized a race-neutral approach, taking the previous map and tweaking it for population changes.
The state contends the Black population is too spread out and that creating a second district would require contortionist maneuvers, such as connecting coastal areas in southwest Alabama to peanut farms in the east.
“The VRA is meant to prohibit racial gerrymanders, not require them,” Alabama Attorney General Steve Marshall said in a statement to The Associated Press.
The 7th Congressional District snakes a winding path from Birmingham through the state’s Black Belt to sections of Montgomery. The other six districts have reliably elected white Republicans for the last decade.
US Rep. Terri Sewell, a Democrat, represents the district and said she would welcome the opportunity to have another colleague fighting for voting and civil rights, as well as other issues she supports.
Sewell was the only member of Alabama’s delegation to support restoring a provision of the Voting Rights Act that was gutted in a 2013 Supreme Court decision also arising from Alabama. She also was the only member of the delegation to vote for the American Rescue Plan, the pandemic relief package passed by congressional Democrats and signed by President Joe Biden.
“It’s not about someone who shares your same skin tone, but someone who at least cares enough about your politics to be concerned about your issues,” said the Rev. Benjamin Jones, who leads the St. James Missionary Baptist Church in rural Montgomery County.
The strategy to challenge a map with a safe majority-Black district is not without political risks.
Advocates fear an adverse ruling from the Supreme Court, which has a 6-3 conservative majority, could affect future redistricting cases. Five conservative justices were in the majority in the February vote blocking the use of the map during this year’s elections.
“It’s a troubling sign of what may be to come,” said Michael Li, senior counsel in the Democracy Center for the Brennan Center for Justice at New York University. The court could gut the law, he said, and “make it all but impossible to use.”
The effects of a decision in favour of Alabama could be widespread, potentially allowing states to dismantle or alter districts that have elected Black, Latino and other minority candidates.
If the plaintiffs prevail, lowering the percentage of Black voters in Sewell’s district to help form another could take an overwhelmingly safe district to one that is less so.
Standing by King’s former church in downtown Montgomery, one of the lawsuit’s plaintiffs acknowledges the risk.
“I am nervous and I’m not afraid to say that,” said 26-year-old Khadidah Stone. “I think the nervous part is looking at what happened in the summer with Roe v. Wade. When I’m looking at that, I look at what else is up to possibly being attacked.”(AP)