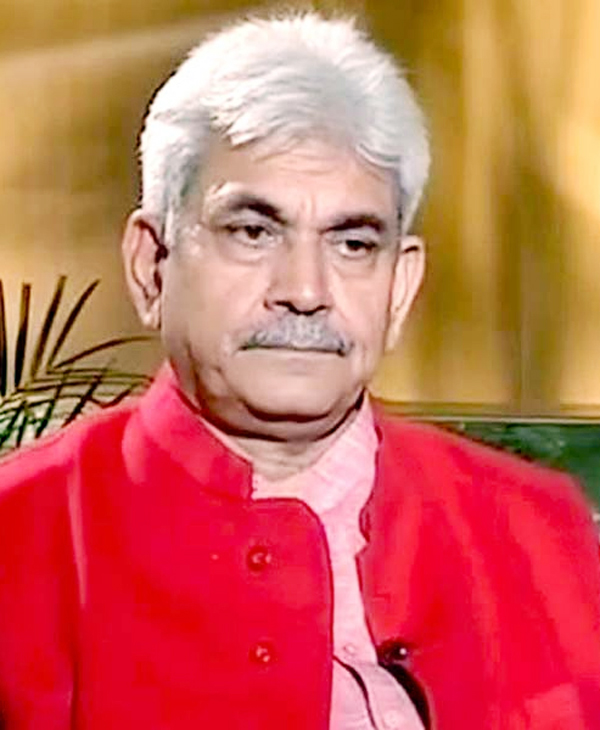 Jammu, Aug 6: Exactly a year after Jammu and Kashmir was made a Union Territory, Centre has appointed senior BJP leader from Uttar Pradesh Manoj Sinha as first ‘political’ Lieutenant Governor succeeding Girish Chandra Murmu, who tendered his resignation yesterday evening after remaining in office for nine months.
Three-time Lok Sabha MP, Sinha, will be administered oath by the Chief Justice, Gita Mittal tomorrow at 12.30 pm in Raj Bhavan lawns. “The oath ceremony is going to be a low-key affair and will be witnessed by selected politicians and bureaucrats. Union Minister of State (Independent Charge) Development of North Eastern Region (DoNER) and MoS PMO, Dr Jitendra Singh will participate in the ceremony”, sources said.
After the oath, Sinha will chair first meeting of the Administrative Secretaries at Civil Secretariat in Srinagar at 3.15 pm.

Sinha, who enjoys the confidence of Prime Minister, Narendra Modi and Union Home Minister, Amit Shah, has earlier served as Junior Minister for Railways and Union Minister for Communications in the first tenure of Modi Government.
“Sixty one year old Manoj Sinha had also met the Prime Minister and Home Minister a week back in Delhi and was sounded of Centre’s desire to place him at the helm of affairs of Jammu and Kashmir”, sources said adding, “the discussion revolved around two key points – to push the development agenda, which had already been initiated under the tenure of former LG Murmu and secondly, to make efforts to put an end to political vacuum in the UT”.
“The selection of a politician and not a person from security paraphernalia was an indication of Centre’s desire to initiate political dialogue with all stakeholders in the UT, which wasn’t possible during the tenure of the previous incumbent”, sources remarked adding, “Sinha is considered to be a quiet and discreet politician with down to earth approach and the fact that he enjoys confidence of PM will help him pursue his agenda in the current appointment”.
During recent past, the J&K UT administration has released politicians affiliated with several political parties, who were incarcerated after abrogation of provision of Articles 370 and 35 A and bi-furcation of State into two Union Territories on August 5,last year.
Sources privy to the development also pointed out, “the new LG is likely to continue with the team of Advisors appointed during the time of his predecessor G C Murmu and is unlikely to make any changes in near future”.
Sinha, who arrived in the summer capital today at 2.30 pm was received at airport by Advisors to previous LG, Chief Secretary B V R Subrahmanyam, few bureaucrats and Director General of Police Dilbagh Singh. A guard of honour was accorded to him at the airport.
Murmu, meanwhile, has been appointed as the new Comptroller and Auditor General (CAG) in place of former Union Home Secretary Rajiv Mehrishi, who turns 65 on August 8.
A formal order on appointment of Murmu as the CAG was issued by the President late this evening.
Selection for this coveted post fell on Murmu in view of past tenure as Expenditure Secretary and also for the reason that top leadership of BJP wanted to have their trusted man at this sensitive posting. Murmu had earlier served as Principal Secretary to Narendra Modi during his tenure as Gujarat CM and was shifted to Finance Ministry, when latter took over as Prime Minister.
Murmu –60 year old IAS officer (1985 batch) of Gujarat, who served as first LG of the Union Territory will have tenure of around 5 years”, sources remarked.
Earlier, in morning a Rashtrapati Bhawan communiqué issued by the President’s Press Secretary today said, “the resignation of Murmu has been accepted. The President has been pleased to appoint Manoj Sinha, to be the Lieutenant Governor of Jammu and Kashmir with effect from the date he assumes charge of his office” in place of Murmu.
Known as ”Vikas Purush” (leader involved in development), Sinha is a three-time Lok Sabha MP who held charge of the Communication Ministry as a Minister of State in 2016 when the telecom industry was engaged in sale of spectrum. Sinha, a B.Tech in Civil Engineering, has been credited with overcoming the menace of call drop.
Elected to Lok Sabha in 1996 for the first time, Sinha, an agriculturist, is the first senior politician of BJP to be elected to a Constitutional post of Jammu and Kashmir.
Sinha, who was elected to Lok Sabha in 1999 and 2014, was front runner for the post of Uttar Pradesh Chief Minister after the party walked away with 265 seats in the 403-member Assembly, but that job finally went to Yogi Adityanath.
After losing polls in 2019, it was expected by political pundits that he shall be offered Ministry at Centre via Rajya Sabha route considering his impressive performance as Communication Minister in the first Modi Government, but it never matured.
Sinha, who began his political career after being elected the president of the Banaras Hindu University Students Union in 1982, was born in Mohanpura of Ghazipur district of eastern UP and has been actively involved in working for the backward villages.
Political observers opined, “61 year old Manoj Sinha’s political stature can be compared to that of former Congress vice-president, Arjun Singh, who was appointed as Punjab Governor in the late 1980s, at the height of Sikh militancy in the state and pushed the political dialogue in the State thereby leading to Rajiv-Longowal Accord”.
Earlier the Centre had appointed Satya Pal Malik, a politician, as Governor of the erstwhile State before it was bifurcated into two Union Territories — Ladakh and Jammu and Kashmir.
Malik was the first career politician to be appointed as the Governor of Jammu and Kashmir in 51 years after Karan Singh, whose term had ended in 1967. Since 1967, the post has been occupied only by retired civil servants, diplomats, police officers and Army Generals.