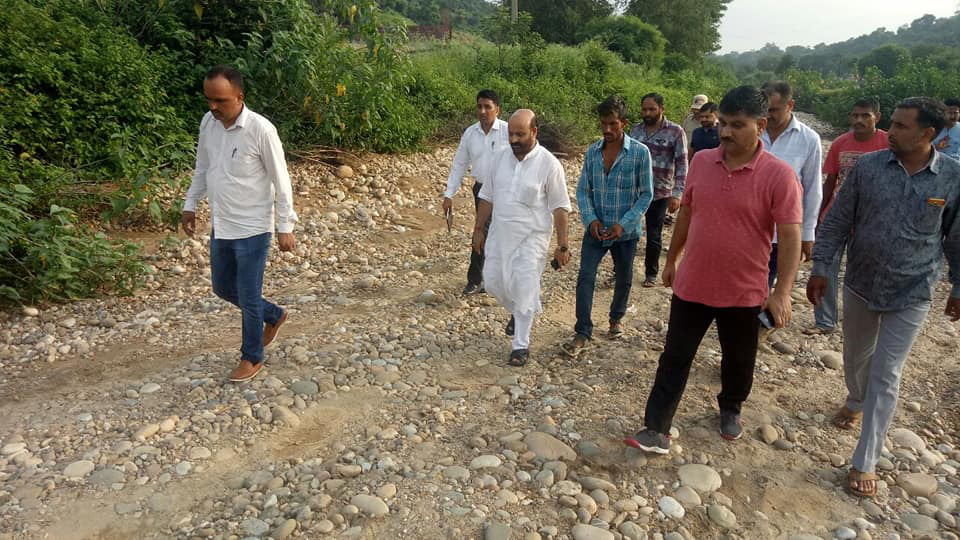 Excelsior Correspondent
JAMMU, Aug 12: BJP organized a campaign of “Har Ghar Tiranga” starting from Shiva Ji Chowk in Gandhi Nagar Mandal which was led by BJP State president, Ravinder Raina (MLA) and former Dy. CM & MLA Gandhi Nagar, Kavinder Gupta.
Click here to watch video
The leaders distributed the Tiranga to the shopkeepers of the Shiva Ji Chowk Nanak Nagar. BJP leaders while chanting the patriotic songs, passed through the busy markets to gain attention of the people.
Ravinder Raina, while addressing the gathering and media, said that such initiatives should be taken by all so that the Tiranga reaches every house and is seen on every roof of each house on August 15, the Independence Day. He said this is the best way to celebrate the Independence Day. He stressed that every citizen of independent India has a duty to devote the whole day in the memory of the great freedom fighters who laid down their lives in the feet of Bharat Mata. He also appreciated the enthusiasm shown by the young brigade of BJP for their endeavour of ensuring Tiranga to reach maximum people. He also said that we have to keep nation above all in every day to day activity.
Kavinder Gupta in his address, advised to expand the campaign to the maximum area of the Mandal they can. He further said this way we can reach to public and every house, village and city be hoisting the National Flag on the historic day of August 15. He said that “we can encourage the younger generation and make them aware about the sacrifices made by the freedom fighters for attaining the Independence from the British rule. He also suggested the workers to involve school children in the campaign in future, so that no corner is left without the Tricolor”.
Baldev Billawaria, district president appreciated the effort and concern by the Gandhi Nagar Mandal in the service of the nation. He prompted all the social and political activists to take this campaign at the grass root level to infuse sense of patriotism among the youth.
Ankush Gupta, Mandal president Gandhi Nagar elaborated about the campaign. He said that every booth president of party shall be distributing the National Flag at the door step of each household falling in their jurisdiction. He said that initially they will be distributing 2000 flags before the Independence Day. During the Republic Day the campaign will be extended to other areas of the Gandhi Nagar Constituency.
Vinay Gupta, Papu Choudhary, Bharat Sharma, National Executive Member BJYM,Malvinder Singh (Shanty), Adv. Harshwardhan, Rohit Mahajan, Nayan Gupta, Sanjay Gupta, Anil Magotra among others were also present during the campaign.