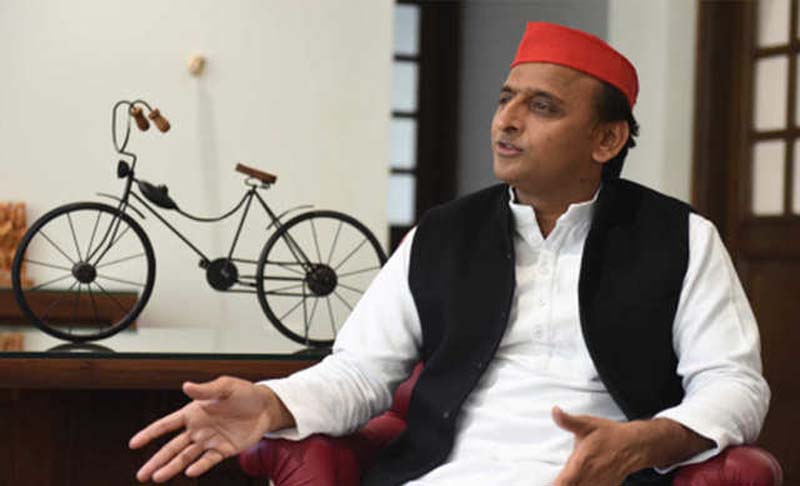 LUCKNOW, Mar 23: Samajwadi Party chief Akhilesh Yadav Saturday termed the BJP “schizophrenic” and alleged that the party tries to co-opt icons like Mahatma Gandhi, B R Ambedkar and Ram Manohar Lohia but follows people who these leaders disagreed with.
The remarks by the SP chief came in response to Prime Minister Narendra Modi’s blog in which he dubbed the efforts of regional parties to form a grand alliance with the Congress as “reprehensible”, saying socialist ideologue Ram Manohar Lohia would be “horrified” as most of these parties claim to be his followers.
Accusing the BJP of practising double standards, Yadav wrote on Twitter, “I wonder which principles are being spoken of. The BJP seems to be schizophrenic.”
“On the one hand they try to co-opt Gandhi Ji, Bhagat Singh, Sardar Patel, Dr Ambedkar and Dr Lohia and on the other hand they follow people who these leaders opposed and disagreed with.”
In a blog to mark the 109th birth anniversary of Lohia, Modi alleged, “Today those parties that falsely claim to be Dr Lohia’s followers are desperate to form an opportunistic ‘maha-milawat’ or adulteration alliances with the same Congress (which Lohia opposed). It is both ironical and reprehensible.”
The Samajwadi Party, Janata Dal-Secular, Rashtriya Janata Dal and Sharad Yadav’s Loktantrik Janata Dal, which will merge with the RJD after the Lok Sabha polls, claim to follow the socialist ideology.
On the other hand, Modi said Lohia would be “proud” of the NDA government led by the BJP for following his ideas.
Hitting out at the Congress, Modi said whenever Lohia spoke, the Congress “trembled with fear”.
He said Lohia had once claimed that during the Congress regime neither agriculture and industry nor the Army improved. (PTI)