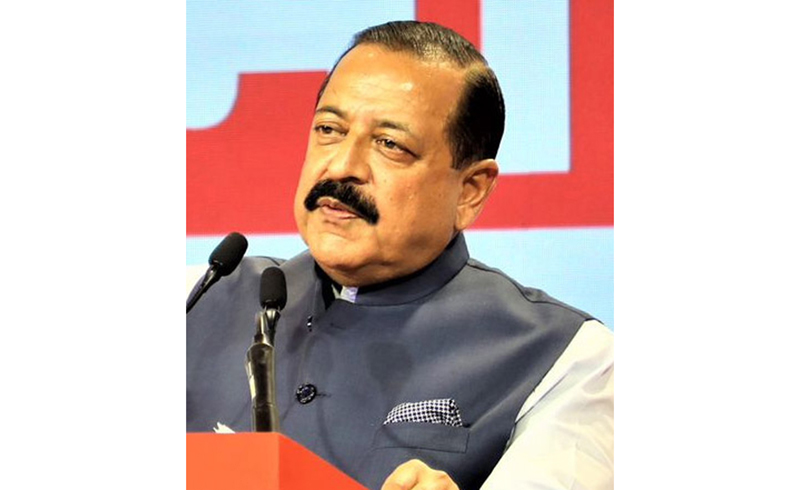 No stoning now, tricolor in every house

JAMMU, Sept 16: Union Minister of State in the Prime Minister’s Office (PMO) Dr Jitendra Singh said today that Nation First for the BJP as well as Central Government under Narendra Modi was proved when the BJP withdrew support to PDP Government in Jammu and Kashmir in 2018 purely in national interest.
Addressing Republic TV’s conclave ‘Rashtra Sarvopari’ this afternoon, Dr Jitendra Singh said the PDP-BJP Government was in alliance in Jammu and Kashmir in 2018. “There was no confidence motion against the Government. No agitation or protests against it but still the BJP walked out of the Government as it felt that its continuance in the Government was not in the national interest. This shows for the BJP, nation is always above power, above party,” he added.
He said the BJP Government has done away with complaints of regional discrimination within Jammu and Kashmir following August 5, 2019 decisions and there is now equitable development, release of equal funds and the UT is marching towards progress and development with construction of roads, National Highways, railway bridge which is even highest than Eiffel Tower, All India Institute of Medical Sciences, Government Medical Colleges, Expressway and start of Vande Bharat train.
“All this was possible because of restoration of peace in Jammu and Kashmir. If there is peace, there will be development,” he added.
Coming down heavily on certain Kashmir-centric political parties, albeit without naming them, Dr Jitendra Singh said: “Prior to August 5, 2019, there used to be headlines by these parties that there will be violence if Article 370 is touched. No one will pick up tricolor in Kashmir. However, all this was proved wrong and after abrogation of special status of erstwhile State, tricolor was raised in every house and there is no stoning now”.
Asserting that common man walking in Srinagar wants peace, the Union Minister said the people of Kashmir especially youth want to be part of development journey of Narendra Modi.
“Most terror-infested districts in Kashmir are now producing toppers. In recently declared NEET results, 10th topper was from Shopian district of Kashmir. Youth of the Valley don’t want to miss the bus,” he added.
Dr Jitendra Singh said the abolition of bi-annual Darbar Move practice by the Government saved Rs 200 crore.
“Jammu and Kashmir was deprived of self-rule by those very political parties whose slogan was self-rule for J&K. For 70 years, there was no grassroots democracy in J&K. One day experts will analyze why successive Jammu and Kashmir Governments deprived the people of Zila Parishads and Panchayati Raj which was established by Narendra Modi Government after abrogation of special status of Jammu and Kashmir on August 5, 2019,” Dr Jitendra Singh said.