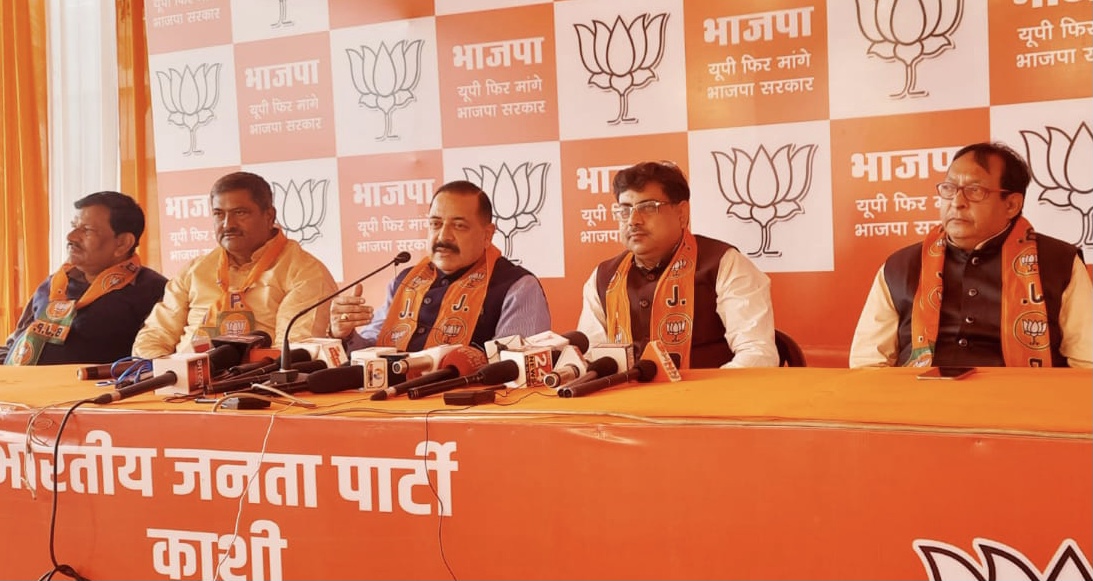 VARANASI (UP), Feb 24 : Union Minister and Senior BJP Central leader Dr Jitendra Singh said here today that on the one hand BJP liberated Uttar Pradesh from the unholy nexus of crime and on the other hand BJP reinvented the holy city of Kashi with the direct personal intervention and leadership of Prime Minister Narendra Modi.
Addressing the BJP Press Conference at Party Media Centre, Dr Jitendra Singh said, while on the directions of Prime Minister Modi, Chief Minister Yogi Adityanath has, in the last five years brought to book the most notorious criminals and law offenders one after the other, it was during the Samajwadi Party regime that instead of being punished, the criminals and offenders enjoyed protection from the government. He reminded how the notorious criminal Mukhtiar Ansari was allowed to sneak out of the State by the earlier government and it was only after the BJP government took over in the State, he was brought back to Uttar Pradesh and is now lodged behind the bars in the Banda jail.
While the Samajwadi Party regime earned the dubious reputation of eroding the cultural and civilisation ethos of Uttar Pradesh, Dr Jitendra Singh said, it is under the BJP rule that with the active interest and inspiration of Prime Minister Narendra Modi, the world’s oldest habitat city of Kashi has been renovated and restored to its pristine glory. As a result, he said, the number of devotees and pilgrims visiting the Kashi-Vishwanath temple from across the country and the world has also suddenly increased over the last two years or so.
Making a dig at the Samajwadi Party and their allies, Dr Jitendra Singh said, the choice for the voters is very clear. He has to decide whether in the next five years Uttar Pradesh will ride on “Danga” Expressway where vehicles were stopped and passengers were looted or Uttar Pradesh will ride on “Ganga” Expressway as envisaged for Uttar Pradesh by Prime Minister Modi.
As the polling process moves from Eastern Uttar Pradesh to Western Uttar Pradesh, Dr Jitendra Singh said, the support of BJP is increasing by each day and the over confidence of the opposition parties withering away. He said, the people have decided to be part of the crime-free development journey led by BJP in the State.