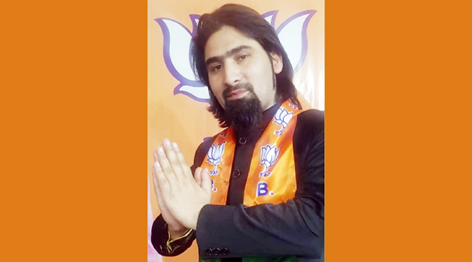 Excelsior Correspondent
Srinagar, July 8: In one of the major attacks in Kashmir, militants tonight shot dead a local Bhartiya Janta Party (BJP) leader along with his two family members in North Kashmir’s Bandipora district.
Click here to watch video
A senior police officer said that former district president of BJP, Waseem Bari, along with his father Bashir Ahmad and brother Umar Bashir were shot dead by militants at Muslimabad in Bandipora district of North Kashmir tonight.
The official said that the trio were at their shop outside their house when militants fired indiscriminately at them. They were critically injured in the attack and were shifted to nearby hospital but succumbed to their injuries.
Sources said that two militants armed with silencer fitted AK-47 rifles came on a motor cycle and fired at the BJP leader and his brother and father who were on shop outside their house. They said that the incident happened near the Police Station.
The militants fled away after carrying out the attack and left them in a pool of blood. Sources said that the trio died on the spot.
The official said that family had 10 security guards for protection but none of them was with them at the time of the attack.
Police have detained all the security guards under Police Act and they are being questioned.
A police spokesman said that a case has been registered under relevant Sections of law. “Investigation is in progress and officers continue to work to establish the full circumstances of this terror crime besides why he was without any security at the time of incident. The men deployed for his security are being detained for negligence under Police Act. Area has been cordoned and search in the area is going on”, the spokesman said.
MoS Prime Minister’s Office, Dr Jitendra Singh tweeted: “Over the telephone, PM Narendra Modi enquired about the gruesome killing of Waseem Bari. He also extended condolences to the family of Wasim.”
“Terribly shaken by this brutal attack by desperately disgruntled terrorists looking for soft targets #Kashmir, district #Bandipora # BJP President Wasim Bari, his father and brother, no more, “Dr Jitendra Singh further tweeted.
BJP president, Jagat Prakash Nadda, condemned the killing of the BJP leader. “We lost Sheikh Waseem Bari, his father & brother in Bandipora, J&K today in a cowardly attack on them. This is a huge loss for the party. My deepest condolences are with the family. The entire party stands with the bereaved family. I assure that their sacrifice will not go in vain”, he tweeted.
BJP leader Ram Madhav expressed shock at the killing of party leader Wasim Bari, his brother and father by militants and noted that the incident took place despite security provided to them.
“Shocked and saddened by the killing of young BJP leader Wasim Bari, his brother and father by terrorists in Bandipora. Bari’s father was also a senior leader. This despite 8 security commandos. Condolences to the family,” Madhav, who is his party’s pointsman for J-K, tweeted.
The attack comes at the time when senior security officials claimed that they have wiped out militancy in South Kashmir. This year 123 militants were killed so far in Kashmir.
The attack comes at the fourth death anniversary of top Hizbul Mujahideen commander, Burhan Wani. He was killed in 2016 on the same day during a gun battle in South Kashmir. Militants had called for strike on the anniversary of Hizbul commander and security across Kashmir was tightened to prevent any violence.
Former Chief Minister Omar Abdullah also condemned the attack on BJP leader and his family members. “Sorry to hear about the murderous terror attack on the BJP functionaries & their father in Bandipora earlier this evening. I condemn the attack. My condolences to their families in this time of grief. Sadly the violent targeting of mainstream political workers continues unabated”, tweeted Omar.
BJP J&K president Ravinder Raina described Waseem Bari as ‘true soldier of Mother India’ and said his sacrifice won’t go in vain.