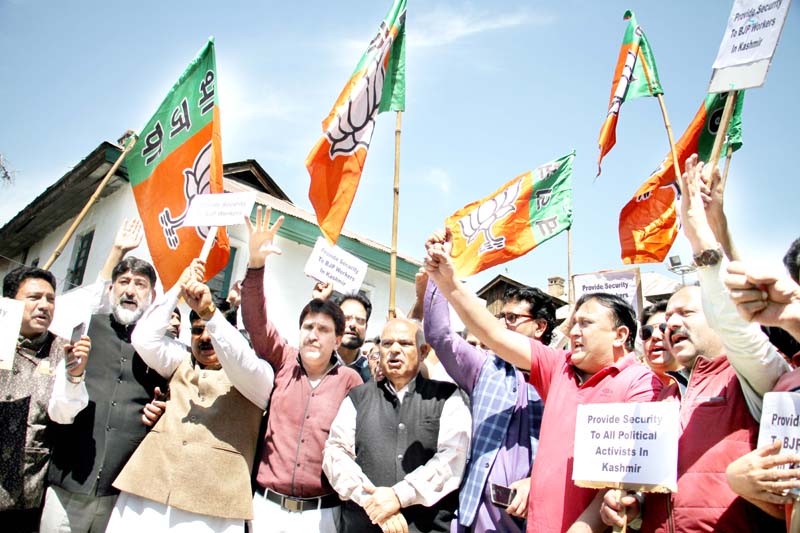 Excelsior Correspondent
SRINAGAR, May 7: A senior functionary of the Jammu and Kashmir unit of BJP today surrendered his security as a mark of protest against the withdrawal of security to the party activists by the Government and the killing of party’ leader by terrorists on Saturday.
BJP’s state general secretary (organization) Ashok Kaul surrendered his security and a vehicle provided by the Security Wing of Jammu and Kashmir Police after a protest at Press Enclave here against the killing of party’s district vice-president for Anantnag, Gul Mohammad Mir, on Saturday and the failure of the administration to provide security to political activists in the valley.
Kaul said he was surrendering his security as a mark of protest till all political activists in the State were not given security.
Condemning Mir’s killing, the BJP state general secretary said the party leader’s killing was a failure of the State administration.
“He (Mir) was given security in June 2018 after we requested the Government. A constable and a SPO were provided to him. But unfortunately, the constable was withdrawn in December 2018. After that, his house was attacked, but he fought and saved not only himself but the SPO as well,” he said.
“I had written to SSP Anantnag on January 13, 2019 for providing him security once again. I was told that he had no threat and should return home as he was putting up at party office at Jawahar Nagar (in Srinagar). Afterwards, the SPO was also withdrawn. The (government’s) grievance cell also wrote to the police last month to provide him security, but it was not. This is the failure of the administration,” he said.
Kaul asked why was security provided to Mir in 2018 if he had no threat and held the State administration responsible for his killing.
Kaul said he had sent Mir home from Srinagar after about two months as the police gave him an assurance that Mir’s life was not in danger.
“So, I also hold myself guilty and hence surrender my security and will not take it back till security is given to all political activists. When my workers are not secure, then why should I take the security? I am surrendering my security as a mark of protest,” he said.
Kaul demanded the arrest of Mir’s killers and asked the government to provide security to all political activists in the Kashmir valley.
The BJP’ state general secretary later took an auto rickshaw from the Press Colony and left behind the vehicle and the security personnel assigned to him there.

Pathania for justice with Rehbar-e-Khel teachers