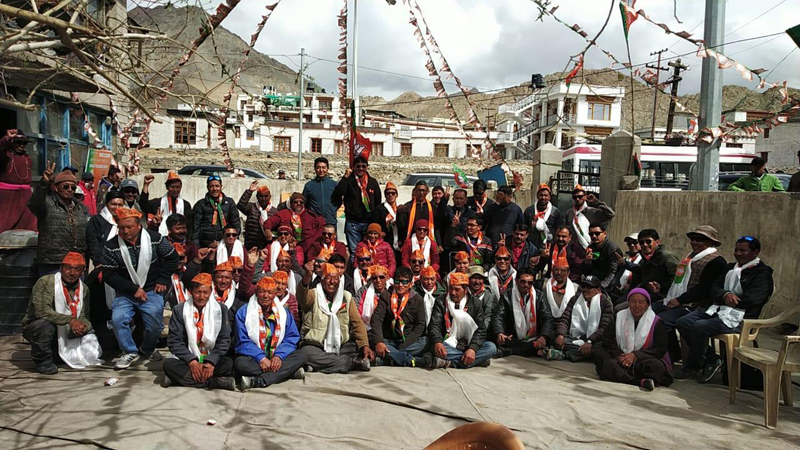 LEH, LADAKH, Apr 18: BJP is committed to transform Ladakh in a developed hilly region of the State and country under the leadership of Prime Minister, Narendra Modi.
This was stated by BJP State secretary, Vikram Randhawa (MLC), while addressing an election rally here today, in the support of Jamyang Tsering Namgyal, BJP’s candidate for Ladakh Lok Sabha seat.
After the filing of nomination, BJP senior leaders started vigorous campaign for the Ladakh Parliament Constituency, which was initiated from village Walnas.
Putting their faith in the party leadership and party’s vision to develop Ladakh, more than hundreds of PDP workers hailing from village Walnas also joined the BJP on the occasion in presence of MLC, Vikram Randhawa, senior leader of party, Satish Sharma, MP candidate, Jamyang Tsering Namgyal and Dorjey Angchuk district, president.
Vikram Randhawa, while speaking on the occasion, said that today whole of the India is voting enmass in the favour of Modi as they have full confidence on the able leadership, decisive Government and above all faith in democracy, that has been delivered by Modi in the past five years of NDA Government.
He said that even the people belonging to Ladakh division have developed great faith in the Modi Government as they have themselves witnessed the great development works that have been materialized under the present dispensation. By voting BJP’s MP to power, the people of Ladakh will follow the path of development, claimed Randhawa.
Satish Sharma, in his address complimented the BJP candidate, Jamyang Namgyal for his dedication in the public life. He said that under his young dynamic leadership, the Ladakh will progress on the most modern lines.
Jamyang Namgyal, in his address, claimed that the Ladakh has long been kept underprivileged, but now the region has claimed its rights with the support and special attention of Modi. He promised the people of Ladakh, that he will serve the interests of the region and the nation, with all his might and requested the voters to vote heavily to strengthen the hands of Modi.
Senior leader of PDP, Adv Taashi Gyaltsen, who recently joined BJP along with his supporters, was given the responsibility of district vice president and Councilor, Renchan Lamo was given the responsibility of district secretary in the party.