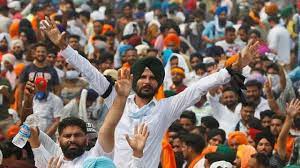 Harsh Dev Singh
The farm laws have ultimately been withdrawn. The farmers have emerged victorious. The movement launched for the repeal of the ‘anti-farmer’ laws has succeeded after a year of relentless struggles and sacrifices by the agricultural class. The govt was made to succumb, to bow down before the unity demonstrated by the farming community irrespective of their caste, colour and creed. It was not an easy proposition for farmers. They were harassed and humiliated. Bullied and brutalized. Threatened and persecuted. Intimidated and abused. Vested interests called them ‘Pakistanis’, ‘Khalistanis’, ‘Deshdrohis’ and so on and so forth but the indefatigable farmers continued with their protests undeterred by vituperative name-calling, stigmatization and other virulent invectives hurled upon them. But then the BJP leadership is known to be using its massive mandate as a license to extinguish the democratic chatter. Any question to its policies becomes ipso facto antinational. Braving the intimidatory tactics of the govt on one hand and vagaries of weather on the other, the farmers kept the banner of resistance high, refusing to budge from their stand. Kudos for the brave ‘Anndatas’. They did not yield to the bulldozing pressure tactics, murderous assaults and infinite atrocities inflicted upon them. Several hundreds sacrificed their lives for the cause so proudly espoused by them. Keeping the flag of kissan unity aloft, the old, the young, the mothers, the daughters braved the inclemencies of weather continuing the struggle for justice for an year ultimately forcing the dictatorial regime to surrender to their legitimate demand. The farmers have every reason to celebrate. It is a victory of the indigent, poor over the powerful and the corporate. Victory of peoples’ struggle. A victory full of sacrifices.
The farmers agitation has not only been a landmark but has a lesson for the Govts. The democracies are not about electoral politics alone. They are also about popular movements and will of the people. You can suppress a section of people for sometime but you can not suppress an entire class of people for all times. No dictator or tyrant can bulldoze the collective sentiment of the public which alone is paramount in democracy. It is the peoples’ will that ultimately prevails. And ours has been the most populous and ebullient democracy where people can hold the govt by collar and make it answerable and accountable. The farmers agitation has another message to deliver. It speaks for the desperation of the poor for a fair deal, equity and justice. The struggle signified an eloquent expression to pent up anger amongst the people. It can be seen as a symbol of public anger, contempt and revulsion against policies of suppression and dictatorial approach.
Bullying or brutalizing the protestors is antithetical to democracy. The best sign of good governance is freedom of a democratic protest march and not a barricaded street with policemen carrying batons and shells. A worst spectacle in democracy is a conscientious, peaceful protestor being dragged into a police van. Aspirations of human souls can’t be crushed through gigantic machines or coercive apparatus of the state. The will of the people has to be respected. A govt can’t be run simply on the strength of majority that it commands inside the legislature but on the strength of public confidence that it enjoys. Quelling protestors, hammering them through iron fist of the police and running them down under the vehicles of VVIPs has only brought ignominy to the present rulers and caused a precipitous fall in their credibility. Lakhimpur incident is undoubtedly an act of naked authoritarianism bordering on schizophrenia that would continue to haunt the nation for years.
The farmers may not have obtained many educational degrees but they seem to have realized the power of democracy and their rights under our great constitution. The right to question the govt, to speak out and to have a dissenting view. They are finally shaking off the ‘Jo Hukam Sarkar’ mentality. No longer scared of being pulverized for daring to confront the govt for safeguarding their rights. The laws have therefore been agreed to be withdrawn. But the other issues irking the farming community remain. And they have resolved to fight for them. The govt should have no inhibitions in implementing the MS Swaminathan report so as to assure a fair deal to the farmers for their produce. Even the economic survey 2016 had acknowledged the right of farmers for being adequately compensated stating therein that average farm income in 17 states of India was only 20,000 a year. This makes the demand of farmers for MSP all the more justified. This could be a significant step towards reformative agriculture. More money in the hands of farmers would mean an economically viable profession for agriculturists besides a galloping GDP. This would strengthen rural livelihood, reduce employment pressure on cities and create rural demand thereby revitalizing rural economy. Then the farmers are rightly asking for compensation for those who lost their lives during the course of the protests. There is a point. Why at all should an obnoxious legislation be thrust upon a section of people who consider it detrimental to their interests. And if the laws were to be eventually withdrawn, why was the farmers heartland allowed to burn for an year with several hundreds of precious lives lost besides unprecedented losses sustained by rural economy.
The agitation of the agriculturalist class has not only given a befitting reply to politics of suppression but has galvanized Indian democracy. Surely we can not allow ourselves to be cowed down by threats, coercion, intimidation or persecutions. We have a huge cultural history of tolerance and accommodation which can’t be altered by arrogance, aggression and aberrations. Resorting to strong arm methods in times of rampaging democratization could lead to dangerous denouncement. It’s time therefore for protagonists of muscular majoritarianism to awaken. A govt shall succeed only if it pursues politics of thrust, credibility, inclusion and consensus building.
(The author is former Education Minister and Chairman JKNPP)