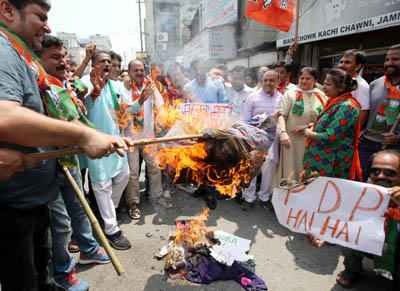 Excelsior Correspondent
JAMMU, July 14: A group of BJP activists today staged a demonstration here and burnt an effigy of former chief minister and PDP president Mehbooba Mufti over her statement that any attempt by the Centre to engineer a split in her party would have “extremely dangerous” consequences.
Led by district president (Jammu West) Ayodhya Gupta, BJP supporters held the demonstration at Kachi Chawni in the heart of the city and demanded that a sedition case be registered against Mufti.
The former chief minster had yesterday said, “…If there are any attempts to engineer a split in the PDP like it was done in 1987 to commit robbery on people’s vote and to crush the MUF (Muslim United Front), the results will be extremely dangerous.”
She also recalled that the events post the 1987 Assembly elections “created”  Syed Salahuddin, the chief of Hizbul Mujahideen, and Mohammad Yasin Malik, the Jammu Kashmir Liberation Front head.
“We request the governor (N N Vohra) to take serious note of her anti-national statement, file a sedition case against her and put her behind bars so that no other politician ever dares to make such a statement,” Gupta told reporters.
He termed Mufti’s statement “shameful” and said “terrorism is getting boost by such utterances”.