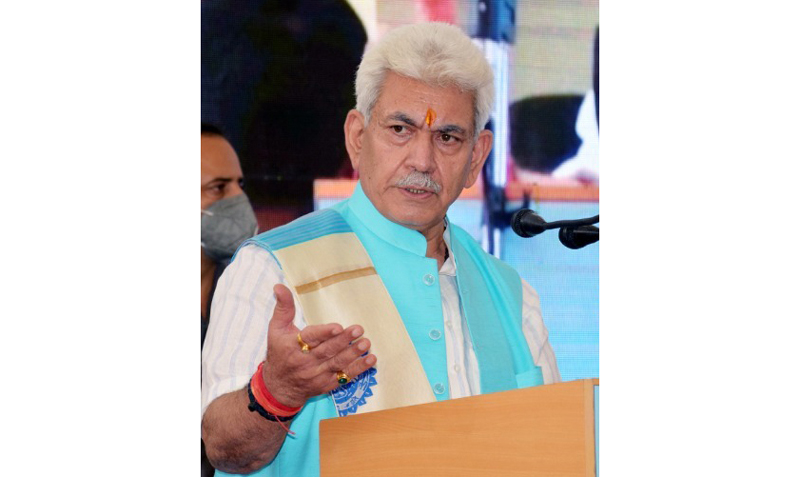 JAMMU, Sept 22: In a significant statement, Lieutenant Governor Manoj Sinha said today that there was a big racket which wanted the Darbar Move to go on and declared the question doesn’t arise that the Government will work as per whims and fancies of some persons though it was committed to welfare of common man and small traders.
Addressing a function after inauguration of ‘Jammu Haat’ along with Union Minister of State in the Prime Minister’s Office (PMO) Dr Jitendra Singh, Sinha said the Government money for him is like ‘Gau-Mass’ and he will use every penny for benefit and development of Jammu and Kashmir.
“Some say Darbar Move will hit economy. I came here on August 7 last year and I saw 200 trucks loaded with files moving (from one capital City to another after every six months). It consumed lot of time, And when a file was called for some work, it was found misplaced,” Sinha said, adding that it was a big racket which some persons wanted to sustain.
However, he declared that now e-office is fully functional
Asserting that both Central and Jammu and Kashmir Governments were committed to do everything for welfare of the people and development of the Union Territory, the Lieutenant Governor said the question doesn’t arise that the Government will work at whims and fancies of certain elements.
“For common man and traders, we will do everything that is required. All steps will be taken for welfare and development of the people. But those who think that Jammu and Kashmir will run the way they want, I think they are badly mistaken,” Sinha declared.
He said the time has gone when some corrupt elements used to create problems but now there is complete transparency in working of the Government.
He stated that for him the government money is like ‘Gau Mass’ and he will ensure that each penny is used for J&K’s benefit.
“The Government money is for welfare of the people. Some people became rich with this money earlier but that time is now over,” Sinha said.
In June, the J&K Government ended the biannual tradition of shifting capitals between Srinagar and Jammu and directed the employees to vacate their accommodations in both cities.
Around 10,000 government employees working in Civil Secretariats, used to move along with hundreds of files twice every year. Earlier, administrations used Jammu as its winter capital and Srinagar as its summer capital.
On completion of the e-office, Lt Governor Manoj Sinha had said there was no need to continue the practice of ‘Darbar Move’ of the government offices and ordered the workforce to vacate the Governmnet accommodation at the twin capitals of Jammu and Srinagar within three weeks.
The end of the biennial ‘Darbar Move’ save the exchequer Rs 200 crore each year.