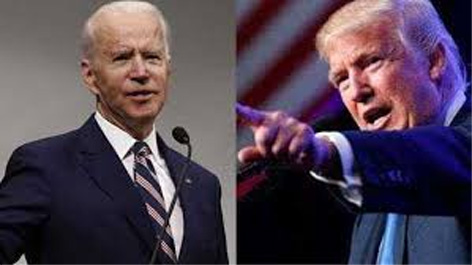 Montclair, June 3:Democrat Joe Biden and Republican Donald Trump have won Indiana’s presidential primary.
Indiana is among the states and the District of Columbia with primaries on Tuesday. Pennsylvania offers the day’s biggest trove of presidential delegates. The Democratic result in Indiana was expected because Biden’s rivals have already dropped out of the race.
The former vice president’s haul of delegates from the Indiana victory pushes him closer to the 1,911 delegates he needs to capture the Democratic presidential nomination.
The state’s primary was delayed by four weeks because of the coronavirus outbreak.
Voters in nine states and the District of Columbia are participating in primaries Tuesday.
The states voting are Idaho, Indiana, Iowa, Maryland, Montana, New Mexico, Pennsylvania, Rhode Island and South Dakota.
Indiana polls are scheduled to close first, at 7 p.M. Eastern time. Pennsylvania offers the day’s biggest trove of delegates. Joe Biden is already the presumptive Democratic presidential nominee, but he needs to win 89% of all delegates at stake Tuesday to formally clinch the nomination. If he doesn’t reach the requisite number on Tuesday, he has more opportunities to do so later this month.
Voters are navigating coronavirus concerns and curfews in place amid protests of George Floyd’s killing by police. In-person voting is down in every state, as many voters were encouraged to vote by mail because of the pandemic. (Agencies)