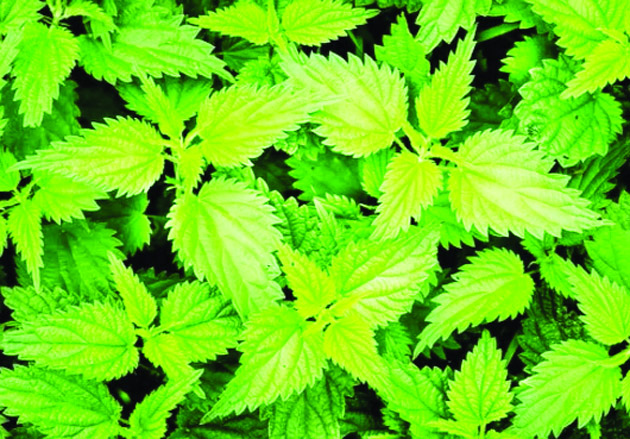 Bichu butti also known as stinging nettle, is found in the Himalayan region from Kashmir to Kumaon and nettle tea prepared from the leaves of the plant is a traditional remedy for women under going labor pain and it helps in milk production / makes lactation easier for newborn.
Urtica dioica, commonly known as stinging nettle, bichu butti in Hindi / Punjabi, soyee in Kashmiri, vrishchhiyaa shaaka in Sanskrit and anjuraa in Unani, is a herbaceous perennial plant belongs to the family Urticaceae and is widely distributed throughout the temperate / tropical areas around the world. It is found in the Himalayas from Kashmir to Kumaon at altitudes of 2100-3200 m. The plant causes skin irritation, red bumps and welts by injecting a stinging liquid in a similar way as a hypodermic needle would do if touched without gloves. The plant belongs to the group of phytoalimurgic vegetables that includes wild edible species, used in the past when there was a shortage of food. The genus Urtica is derived from word ‘uro’ to burn or ‘urere’ denotation to sting. The plant bears opposite, cordate and pointed leaves and both the leaves / stems are covered with erect and bristly glandular stinging hairs that contain acetylcholine, formic acid, 5 hydroxytryptamine and histamine.
Phytochemical studies revealed the presence of many valuable chemical compounds like phytosterols, saponins, flavanoids, tannins, proteins and amino acids. The plant also has been used as food, fiber, paint, manure and cosmetics. It has been reported to have various pharmacological activities like antibacterial, antioxidant, anti-inflammatory, antiviral, anti-colitis, anticancer, analgesic, immunomodulatory and hepatoprotective effects.
Traditionally, bichu butti is used to treat stomachache in Turkish folk medicine. Balkan countries use the leaves in the form of an infusion as a remedy for the treatment of diarrhea, vaginal discharge, internal and external bleeding. The ancient Egyptians also apparently used the infusion of nettle for the relief of arthritis and lumbago. The great nutritive values produced by the leaves are involved in the human consumption as a tonic for strengthening the body, in the preparation of soups and several dishes. In Europe, the flowers, leaves and seeds are used as diuretic and astringent. Nettle tea and tincture are curative of feverish gout, as well as of intermittent fever and ague. Fresh nettle juice in doses from one to two table spoon is a most useful remedy for all sorts of bleeding, whether from the nose, the lungs or some internal organ. The decoction of the leaves and stalks taken in moderate quantities is a cure for minor skin maladies.
The extracts of bichu butti have an antioxidant property which purify body and helps to remove scars and blemishes. It also delays ageing by giving wrinkle free skin. When dried, the leaves often relieve asthma and similar bronchial troubles by inhalation. The leaf extract has been reported to improve glucose homeostasis in vivo. Nettle tea is a traditional remedy for women who are going under painful labor as it acts as a coagulant. Besides this, it will help in milk production and makes lactation easier for newborn. Plant is also used for sciatica, for incipient wasting, for difficulty in breathing or some heart troubles, cough, palsy, suppression of the menstrual flow in women, rheumatism and for lack of muscular energy.
Folia urtica is used in the alcohol preparation which is used in the therapy for chronic hepatitis, cholangitis, cholecystitis and habitual constipation. The plant has been used for hundreds of years to treat painful muscles and joints, eczema, arthritis and anemia. Today, many people use it to treat urinary problems during the early stages of an enlarged prostate (called benign prostatic hyperplasia or BPH). It is also used for urinary tract infections, hay fever (allergic rhinitis) or in compresses or creams for treating joint pain, sprains and strains, tendonitis and insect bites.
(The authors are from the division of
Biochemistry SKUAST-Jammu)