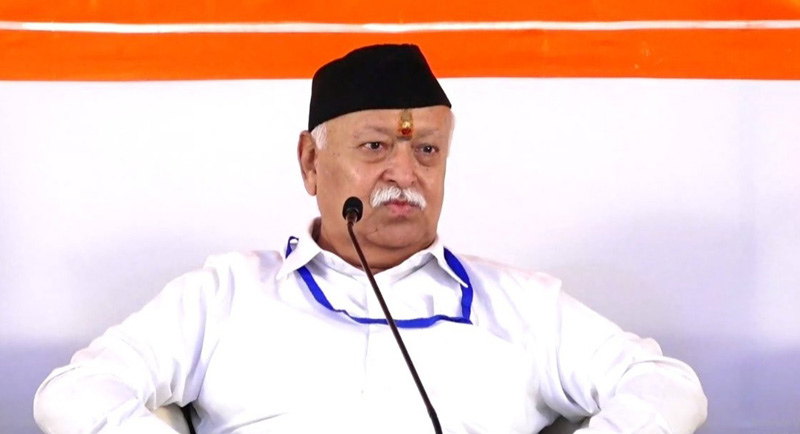 JAMMU, Oct 3: RSS chief (Sarsanghchalak), Dr Mohan Bhagwat during the concluding day of his four day visit to J&K this evening discussed prevailing political and law and order situation with senior leaders of Bharatiya Janata Party, some prominent citizens and socio political activists from twin UTs of J&K and Ladakh.
According to sources, before leaving for Union Capital this evening, Dr Bhagwat held detailed discussions on the prevailing political and law and order situation in twin UTs post abrogation of Article 370 and sought their views on overall situation in J&K and Ladakh regions.
Sources said some of the activists from J&K apprised the RSS chief about the problems being faced by the people even after the abrogation of Article 370. They alleged that public grievances redressal system is totally poor in UT of J&K and people are not being heard by the administration. They said that the administration was harassing the people unnecessarily and production of State Subjects is still being made mandatory by some departments.
They said though they expected a new change will be visible on ground after the annulling of Article 370 but the people still continue to face problems which has led to public resentment also, sources said, adding the RSS chief told them that every thing will be set right by and by and people should have patience.
Sources said, Dr Bhagwat also discussed the prevailing situation in UT of Ladakh with the leaders of the region. The leaders from Ladakh with whom RSS leader discussed the prevailing situation of the region in a close door meeting included MP Jamyang Tsering Namgyal, Chief Executive Councillor (CEC) Leh, Tsering Gyalson and Pracharak from the region.
The BJP leaders from J&K with whom the RSS chief held discussions included party J&K UT president, Ravinder Raina, its general secretary ( Org) Ashok Koul, Union Minister and MP from Kathua and Udhampur Parliamentary Constituency , Dr Jitendra Singh and MP from Jammu- Poonch, Jugal Kishore Sharma.
Earlier, while addressing the Swamsevaks through virtual mode from Keshaw Bhawan here, the RSS chief in his philosophical lecture stressed them to rededicate themselves for making the India “Vishaw Guru”.
The RSS chief said that Swamsevaks have to keep in mind that that they have to organize the whole Hindu society which can make India a “Vishaw Guru.” This task can be only fulfilled by them with dedication towards their motherland, he added.
Dr Bhagwat said “We have to work so hard that India should be at the forefront in every field in the world and we should also be in a position to lead the whole world and our ultimate objective should be to build such a nation”. “The work in this regard has just started and not finished yet. So the need of hour is to work with patience, with out self motives and dedication”, he added.
Dr Bhagwat emphasized attending Shakhas regularly as it is important to remain physically, intellectually, and organizationally strong. “Every Swayamsevek has to perform his duty with dedication and commitment”, he said and stressed the need for character and personality building.
He narrated examples of Ramayana to give importance to character building. “A Swayamsevak should be an example for the whole society”, he said.
Swayamsevaks from 989 places joined the virtual meetings across the Union Territory of Jammu and Kashmir to listen the address.
Dr Bhagwat guided the Swaymsevaks on different issues ranging from the formation of the RSS to the expansion of its network across the globe. He emphasized personality building, organization setup, nation-building, and challenges before the nation.
Dr. Mohan Bhagwat said that in the year 2025, the RSS is going to complete 100 years of its formation and there is a need to accelerate activities of the Sangh to mark its centenary celebrations.
He said that the target of the Swayamsevaks should be to reach every household when it will hold its centenary celebrations four years later.
The Sarsanghchalak exhorted the Swayamsevaks to work hard in order to ensure that when the organisation will turn 100 in 2025, the Shakhas should have been extended in all villages of the country.
He advised the Swayamsevaks that their conduct should be good always and people should get inspired from them and they should devote themselves to nation-building.
“The activities we are doing for the last 96 years are to be done with more zeal and enthusiasm without diverting the attention”, he added.
Emphasizing the need of strengthening the organization, he said that real unity is the strength of the nation. “Our strength will be realized only through our unity. We have to remain united”, he said. He narrated examples of the founder of RSS Dr Hedgewar during the early days of Sangh in Nagpur, Maharashtra.
On this occasion, Sanghchalak of North Zone, Prof. Sita Ram Vyas Ji and Sah-Sanghachalak of Jammu and Kashmir province, Dr. Gautam Mangi were also present.
Earlier, the RSS chief visited the residence of senior Sangh functionary of the J&K Brig (retd) Suchet Singh and Dr Gautam Mengi, Sah Sangchalak.