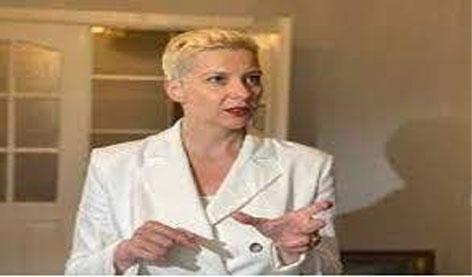 MINSK, Sept 17:Belarusian opposition leader and organiser of the protest against President Lukashenko Maria Kolesnikova was on Thursday charged under the country’s security law with incitement to undermine national security, BBC reported.

Three women have been leading a mass opposition movement, but she is the only one who has decided not to leave the country and go into exile.

Ms Kolesnikova is said to have dramatically ripped up her passport when the authorities tried to expel her from the country.

For the last five Sundays, at least 100,000 people have protested over what was widely seen as a rigged election which were held on August 9 and in which President Alexander Lukashenko claimed an overwhelming victory by garnering 80 per cent of the votes.

The other two women Svetlana Tikhanovskaya, who stood against Mr Lukashenko as the opposition candidate, claimed that she had won the election, but she was forced to flee to Lithuania shortly afterwards.

The third Veronika Tsepkalo, has also left the country.

Last week eyewitnesses saw Ms Kolesnikova, 38, being seized by masked men and driven off in a van.

She was driven to the Ukrainian border with two other people, but she prevented officials forcibly expelling her by tearing up her passport and throwing it out of a car window, those travelling with her said.
(UNI)