E-Paper
Home Todays story Be vigilant at all times: Army chief to troops on borders 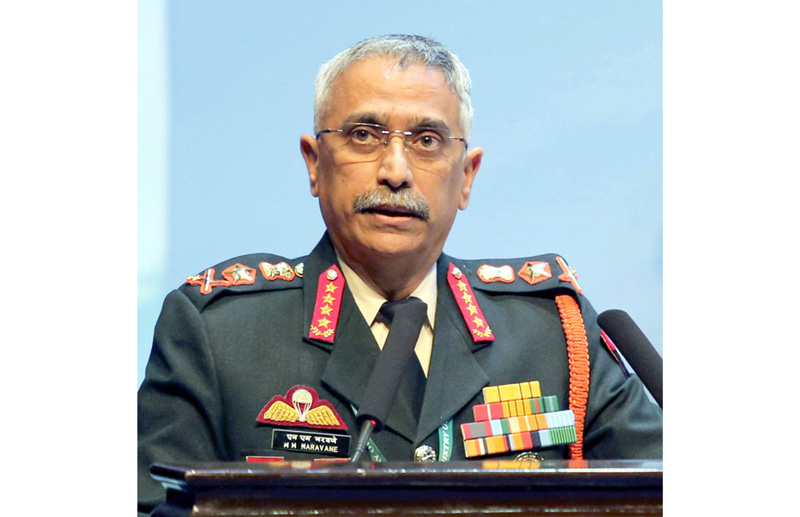 ‘Will meet needs of jawans at all costs’

NEW DELHI, Jan 14:
Army chief Gen M M Naravane today exhorted Army men deployed along borders with China, Pakistan and those fighting the “proxy war” in Kashmir to remain vigilant round-the-clock, and assured that their operational and logistical needs will be met at any cost.
In a message to the 1.3-million-strong force on the eve of Army Day, he said the Indian Army has carved out a “special niche” in the nation’s mind space and that it is not merely a combat outfit or an instrument of national power.
“It is also a valued institution of the country. We remain steadfast in our resolve to uphold our values, ethos and the trust reposed in us by our citizenry,” he said.
The Army chief called the decision of the government to create a Department of Military Affairs under a Chief of Defence Staff as a “seminal step” to facilitate greater integration among the three services.
He noted that the primary responsibility of the Indian Army is to maintain operational readiness of the “highest order” and asked all the personnel, particularly those guarding the borders with Pakistan, China and in Siachen glacier to remain vigilant “all the time.”
The Army chief also asked those engaged in responding to the “complex challenge of proxy war” and internal security situations to remain alert.
“I have no doubt that you shall ensure necessary operational ascendancy with respect to our western adversary, while displaying steadfastness and resilience along the Northern borders,” Gen Naravane said.
“On our part, we shall ensure that your operational and logistic needs, are met at all costs. In our quest to remain sharp and contemporary, we have carefully analysed the geo-strategic landscape and the evolving character of war in emerging conflict situations,” he added.
Gen Naravane said the Army has taken a number of steps towards doctrinal optimisation and capability enhancement to deal with emerging threats.
On creation of military affairs department, he said it will enable greater civil-military synergy, enhance productivity in strategic outcomes and facilitate far greater integration amongst the three services.
“We remain committed to developing necessary operational synergy. The Indian Army is an equal opportunity employer, committed to the principle of gender equality,” Gen Naravane said.
“It gives me great pleasure to announce that the first batch of 100 women Military Police personnel, have commenced training from January 6 and shall shortly be deployed in our field formations,” he added.
The Army chief said the welfare and personal development of the jawans remained the foremost concern.
“There has been a concerted effort, therefore, towards establishing a greater connect with the jawans and their families. We have also, over the last year, launched a vigorous ‘outreach campaign’, to ensure that our veterans, especially those in distant villages, and in far flung corners of the country get their pensionary entitlements,” he said.
He said the next of kin of jawans have received special focus.
“In the last year, we have disbursed from our Welfare Funds over Rs 11 crore to our battle casualties, and Rs 42 core to the next of kin, to meet their sustenance/aspirational needs,” the Army chief said. (PTI)