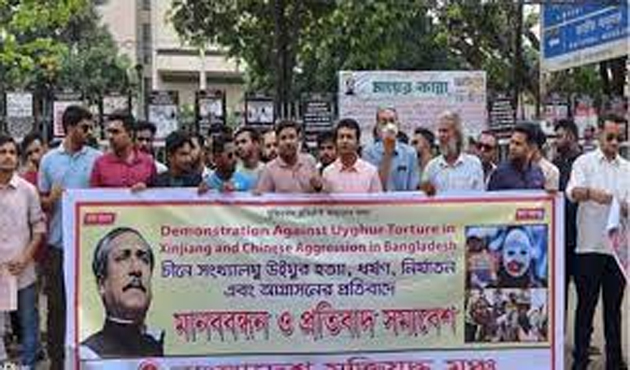 Dhaka, Oct 2:The Liberation War fighters of Bangladesh held a protest rally and organised human chain programme in Dhaka Sunday against the torture of Uyghur Muslims by China.
Presiding over the event, President of the Bangladesh Muktijuddha Manch expressed deep concern over the condition of Uyghur Muslims in China. He said over 12 million Uyghurs living in the Xinjiang province of China are suffering violation of human rights such as forced birth control, conversion and detention in camps.
Speaking on the occasion, Adviser to the organisation and veteran freedom fighter Ruhul Amin Majumder said the Chinese government is constantly interfering with the social, political and religious freedom of the Uyghur Muslim minority.
He said China claims it is adopting policies to combat separatism and religious extremism but they can’t explain how keeping a beard or fasting during the month of Ramadan is religious extremism. Renowned sculptor Rasha said a UN Committee has learnt that close to one million Uyghur Muslims are being held in camps in the Xinjiang region of China.
The Liberation War Fighter’s organisation put forward a four-point charter of demands seeking to stop torture of Uyghur Muslims, guaranteeing them social, political, economci and religious freedom and trial of China by the International Criminal Court for the genocide of Uyghur Muslims.
Another organisation named ‘Islamic Movement Bangladesh’ held a press meet in Dhaka on Saturday on the issue of Uyghurs. It condemned the torture and oppression of the Uyghur Muslims in China. It urged Prime Minister Sheikh Hasina to speak against the persecution of Uyghurs by the Chinese Government.
It demanded that China must stop the harassment and torture of Uyghur Muslims.
(UNI)