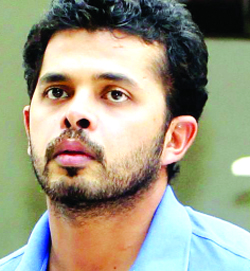 NEW DELHI: Banned cricketer S Sreesanth on Friday told the Supreme Court that he has offers to play English County matches and the life ban imposed on him by the Board of Control for Cricket in India (BCCI) is “too harsh”.

He said he has suffered the ban for four years now and has been acquitted by a Delhi court in the sensational 2013 spot fixing case in 2015.

He said that when life ban on cricketer turned politician Mohammad Azharuddin, who was accused for his involvement in match fixing scandal of 2000, can be reversed then why can’t his life ban imposed by BCCI can be set aside.

On November 8, 2012, the Andhra Pradesh High Court had termed the life ban imposed by the BCCI in 2000 for match fixing on former captain Azharuddin as illegal and said that it is unsustainable in law.

A bench of Justices Ashok Bhushan and Ajay Rastogi noted that appeal against the 2015 order of trial court is pending before the Delhi High Court and the hearing is scheduled in the second week of January. (AGENCIES)