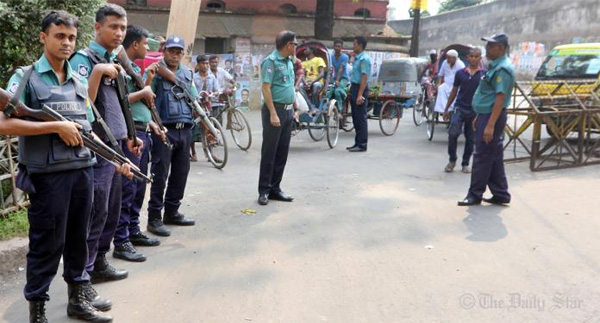 DHAKA, Oct 10: Security was tight in Bangladesh on Wednesday ahead of a special court ruling in a decade old grenade attack case in which opposition BNP chief Khaleda Zia’s fugitive son and her presumed political heir Tarique Rahman is the prime accused.
The attack on an Awami League rally on August 21, 2004, killed 24 people and injured nearly 500 others, including party chief Sheikh Hasina.
“We have taken adequate security measures throughout the capital and any attempt to create anarchy will be dealt with an iron hand,” Dhaka’s police commissioner Asaduzzamn Mia told reporters in front of the makeshift court complex at Nazimuddin Road.
His comments came as 31 out of the 49 people accused, including two former ministers and former police and military intelligence officials, were escorted to the court from high-security Kashimpur Central Jail.
A Dhaka police spokesman said some 4,000 security personnel have been deployed in the national capital to maintain law and order.
Investigators said Hasina was the main target of the attack. Hasina was injured in the attack while party’s women front chief and former president Zillur Rahman’s wife Ivy Rahman were among the dead.
Subsequent investigations found an influential quarter of the then BNP-led government, including Rahman, masterminded and sponsored the attackers — the operatives of militant Harkatul Jihad al Islami (HuJI).
Rahman was tried in absentia with the court declaring him a “fugitive”. He now lives in London where he is believed to have sought asylum though the British authorities have declined to reveal his immigration status.
Other accused included two former ministers of the past BNP-led four party alliance government, several Islamist militants and senior intelligence and police officers, many of them are absconders.
The court wrapped up the hearing on September 18 setting the date for the verdict after a protracted investigation and trial process.
Zia, who is now serving a five-year imprisonment in a graft case, was not made an accused in the case. (PTI)