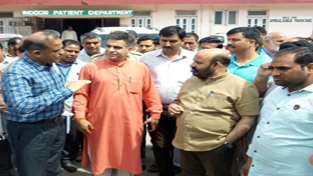 Excelsior Correspondent
JAMMU/RAJOURI, Apr 19: Giving a loud message against the slackness and absenteeism in the Health Department, Minister for Health & Medical Education, Bali Bhagat, today ordered suspension of 23 officials (including 04 doctors and 19 para-medics) in Chowki Chowra block of Jammu, and Sunderbani, block of Rajouri during his surprise visits to various health institutions.
During inspection of Emergency Hospital Chowki Chowra, the Minister found three doctors, including BMO and 17 para-medics absent from duty and ordered their immediate suspension. Similarly, while inspecting SDH, Sunderbani, one Medical Officer and two para-medics were found absent and ordered their suspension.
The Minister also inspected SDH, Nowshera, SDH, Kalakote and District Hospital, Rajouri and took stock of the medicare and other diagnostic facilities there. He also interacted with the patients, doctors and para-medics and enquired about the facilities.
At Sunderbani, while inspecting the on-going work of 100-bedded additional block of hospital, the Minister directed the executing agency to complete the project in a time bound manner and handover the possession of the building by May next. He called for strict adherence of norms and specifications by using quality material to ensure the longevity of assets.
While interacting with the ASHA workers at SDH, Nowshera, who are undergoing training under NHM programme, the Minister sanctioned one additional set of uniform, one pair of shoe and one umbrella annually in their favour for performing their duties more efficiently. These benefits will be applicable to all ASHAs working across the State.
At Kalakote, the people brought issue of encroachment of land of Health Department and called for retrieving and utilizing for expansion of hospital. They also demanded expansion of the hospital to cater to the increased workload of patients. He issued instructions to the concerned authorities for immediate removal of encroachment and restoration of land to the Health Department. He also assured funding for construction of additional 50-bedded block in the premises of SDH, Kalakote for which the DPR worth Rs. 7 crore stands submitted to the Government.
Taking serious note of the absenteeism in the health institutions, the Minister said that Government will not tolerate such a lethargic attitude on the part of employees and such acts will be dealt with severely. He called upon the heads of institutions to monitor the attendance of all employees on regular basis to ensure their punctuality so that the patient care does not suffer.
Bali directed the Director Health Services and CMOs of all districts to conduct regular inspections of the health institutions to ensure punctuality in the health institutions. He also called for strict adherence of dress code in all health institutions and directed for disciplinary action against the wilful defaulters.
MLA Nowshera, Ravinder Raina, Director Health Services, Dr. Gurjeet Singh Soodan and CMO, Rajouri, Dr. Suresh Gupta also accompanied the Minister.