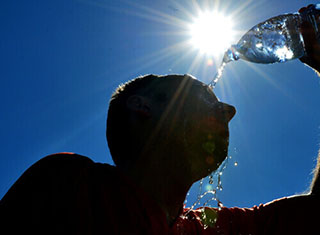 JAMMU: Heatwave further intensified in Jammu and adjoining areas today as the city of temples recorded the hottest day of the season with mercury touching 43.5 degrees Celsius.

A spokesperson for the MeT department said, today was the hottest day in the month of May for the past three years.

The maximum temperature today recorded an increase of 1.2 notches compared to yesterday to settle at 43.5 degrees Celsius, which is 4.4 notches above normal for this part of the season, the spokesman said. (AGENCIES)