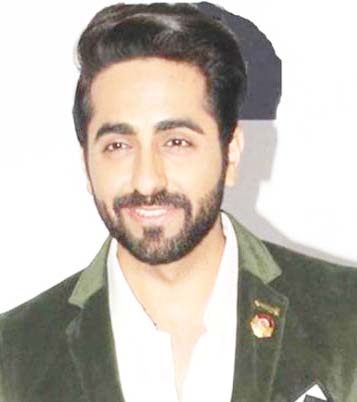 MUMBAI, Aug 12:
Ayushmann Khurrana is happy that his aspiration to work with credible directors on stories that don’t have a “reference point” in Hindi cinema helped him win his first National Film Award for best actor.
Sriram Raghvan’s “Andhadhun” and Amit Sharma-directed “Badhaai Ho”, featuring Ayushmann in the lead, were two of the biggest hits of 2018 making the actor one of the most bankable and consistent performers from the current lot of Bollywood.
“Badhaai Ho” won the best popular film providing wholesome entertainment award alongside Ayushmann’s best actor honour for “Andhadhun”. He shared the best actor award with Vicky Kaushal, who was recognised for his role in “Uri: The Surgical Strike”.
“Aspiration to do something normal and different helped in my success. I always wanted to do something which didn’t have a reference point in cinema. When people see the trailer, they should feel like ‘this is something I haven’t seen before’. And I always wanted to work with credible directors. It didn’t matter if they were established,” Ayushmann told PTI in an interview.
The 34-year-old actor was shooting for an ad film when he got to know about his National Award win. He said he didn’t get the time to express his feelings initially and is still trying to process it.
“This award is something which is announced publicly. It is not like any other awards where you are sitting in the audience and get to know about it. You are prepared. But for this win I was not prepared at all.
“At the same time, I didn’t get the ‘me time’ to celebrate my win. I was surrounded by 50 people so I could not express myself and have my own moment. Now I am trying to digest it. My father called me… he was almost choking. We had a family dinner. It was all very beautiful,” he added.
Ayushamnn said moving ahead he wants to stick to his guts and intuition when it comes to choosing films.
The actor, who has four unique projects– “Dream Girl”, “Bala”, “Gulabo Sitabo” and “Shubh Mangal Zyada Saavdhan” — lined up is happy to be finally getting an opportunity to work with some of the biggest names in the film industry.
“I mostly worked with first timers. Like Shoojit Sircar was not that big when we did ‘Vicky Donor’ or Sharat Kataria was not a huge name when ‘Dum Laga Ke Haisha’ happened.
“But now I am getting to work with big names like Sriram Raghvan, Anubhav Sinha, Amar Kaushik. Now I am working with A-list directors. And I have earned this. I am glad to be in this space,” he said.
Ayushmann shared his best actor National Award with Vicky Kaushal, who won it for “Uri: The Surgical Strike”. (PTI)