Excelsior Correspondent
JAMMU, Aug 31: With an aim to encourage professionalism in the field of Journalism, Press Club of Jammu is going to hold 5th Ashok Sodhi Memorial Awards function for best Photograph on his birth anniversary falling on September 21.
Ashwani Kumar, President, Press Club of Jammu, said here today that this will be an initiative of the Press Club of Jammu, which is in the interest of entire Journalist fraternity. He urged all photo journalists, freelance journalists, citizen journalists and students of various journalism institutes, colleges and Universities of the State to participate in this contest.
Ashwani Kumar said that this is an annual feature in which the best photographs are rewarded suitably with a citation.
Zorawar Singh Jamwal, the Secretary General said that the awards shall be for three categories with cash prizes of Rs 11,000, Rs 8000 and Rs 5000 while five consolation prizes of Rs 2000 each will also be given.
He said entries have been invited from across the State wherein not only the photo-journalists but also the citizen journalists (other than journalists) and Journalism students of Colleges and Universities based in J&K can register themselves before September 15, 2019.
There will be no specific theme for the photographs and those interested can get the forms free of cost from Office Secretary/ Manager at the Press Club of Jammu from September 1 onward.
Senior and professional journalists will be the members of jury to adjudge the best photographs.
Each participant can submit only one photograph (size 8″ x 10″) to the Press Club of Jammu before or by the last date i.e.September 15.
It may be recalled that senior photojournalist Ashok Sodhi had attained martyrdom while performing his professional duties during a fierce encounter between militants and security forces at Samba on May 11, 2008. 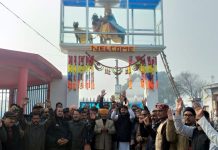 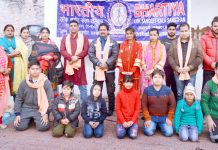