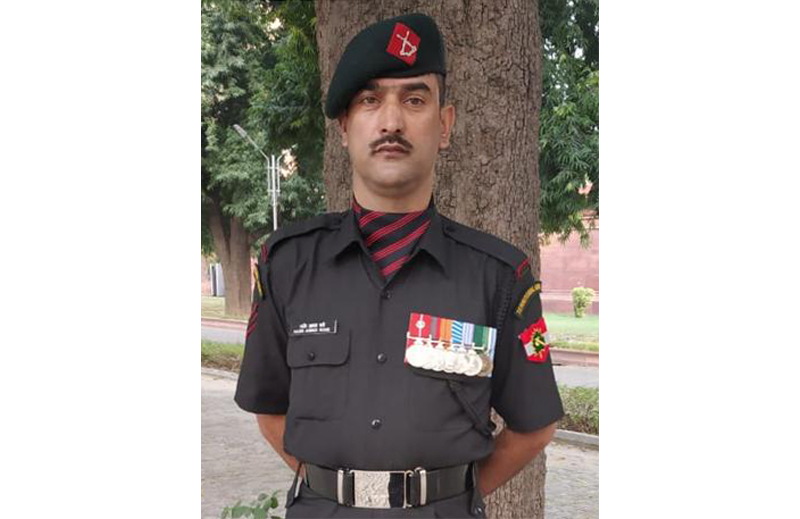 Excelsior Correspondent
SRINAGAR, Jan 24: Lance Naik Nazir Ahmad Wani was posthumously awarded country’s highest peace time gallantry award the Ashok Chakra. President of India Ram Nath Kovind will present the Ashok Chakra to the gallant soldier’s wife Mahajabeen in New Delhi on Republic day.
Wani, 38, hailed from Ashmuji in Kulgam. He was killed in an operation on November 25 during a fierce gunfight. He was a militant, but later came into the mainstream. He joined the Army in 2004.
Ashok Chakra is the highest peacetime military decoration for valour, courageous action or self-sacrifice away from the battlefield.

Click here to watch video
Wani was also awarded Sena Medal for his indomitable spirit in fighting militants. He operated with Rashtriya Rifles units in Kashmir in counter insurgency operations and was instrumental in successful operations during which several militants were killed.
Lance Naik was killed in a counter militancy operation against six militants in Hirapur village near Batgund, Kashmir in November last year. He displayed immense courage under intense firing from militants on the troops on November 25 last year and killed district commander of the LeT and a foreign militant in a daredevil effort. In the encounter, he was hit multiple times including his head and succumbed to injuries before critically wounding another militant.
Lance Naik Nazir joined the Army’s 162 Infantry Battalion (Territorial Army) (Home and Hearth) Jammu and Kashmir Light Infantry, at a young age in 2004.
A Defence spokesman said that Wani was a hero right from the begining and always served for peace in his State. “His extraordinarily fearless and courageous personage was reflected in getting the Sena Medal for gallantry twice in 2007 and 2018. The 2018 Sena Medal was given for killing a militant from a very close range”, he said.
The spokesman said that throughout his life, he always faced grave potential threats and was a source of inspiration for others. “Lance Naik Nazir Ahmad Wani of Cheki Ashmuji of Kulgam district, did his village, district and State proud on the 70th Republic Day”, he said.
“Being from a humble background he worked for the benefit of the underprivileged section of society. A very genial man he was very mindful of the problems of his village and surrounding area. Lance Naik Nazir Ahmad Wani also had many acts of selfless service in the area he belonged to. His heroic efforts during operations will be a beacon of light for the youth of Kashmir”, the spokesman said.
Apart from his wife he is survived by two sons Athar, 20 and Shaid, 18.
It was love at first sight for Mahajabeen, wife of Lance Naik Nazir Ahmad Wani, when the two met at a school in South Kashmir around over 20 years back.
Nearly one-and-half months after Wani’s death in an anti-terror operation in Shopian, Mahajabeen, a teacher and mother of two, says his immense love for her and fearless persona are a source of motivation for her to encourage youngsters to become good citizens.
“I did not cry when I was told he is no more. There was an inner resolve which did not allow me to cry,” she said, on a day the Government announced the Ashoka Chakra, India’s highest peacetime Gallantry Award, for Wani who hailed from Cheki Ashmuji in Kulgam district.
“He loved me so much. For me, he was my guiding light. He always encouraged all of us to make people around us happy, to resolve people’s problems.
“As a teacher, I am dedicating myself to creating good citizens for my state. Leading the young minds in the right direction is my resolve and I am drawing inspiration for it from my beloved husband — the best in the world,” said Mahajabeen.
Refusing to share much details about their school and college days, Mahajabeen said,”We met at school. It was love at the first sight. He was a great husband, always fiercely protecting us.”
Recalling the fateful day of November 25, Mahajabeen said she was at her parents’ house when the shocking news came.
“He had telephoned me the previous evening and enquired about our well-being. I had told him to take care of himself. But destiny had something else for him,” said Mahajabeen.
“He always wanted to make his 162/TA Jammu and Kashmir Light Infantry batellion proud. For him, duty was supreme. He was a source of inspiration for people in our area and community,” said Mahajabeen, who is in her late 30s.