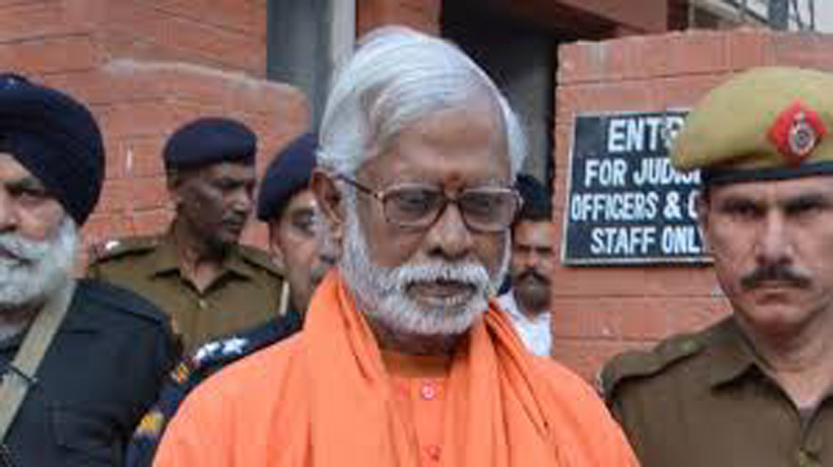 PANCHKULA (Har), Mar 20: Twelve years after a blast on Samjhauta Express killed 68 people, mostly Pakistanis, a special court today acquitted Swami Aseemanand and three others in the case that Islamabad has often cited to counter Indian charges of Pakistan-sponsored terror.
“All the four accused, Naba Kumar Sarkar alias Swami Aseemanand, Lokesh Sharma, Kamal Chauhan and Rajinder Chaudhary have been acquitted by the court, NIA counsel Rajan Malhotra said.
Asked if the National Investigation Agency will appeal against the verdict, the counsel said it will study the judgment first.
The blast on the India-Pakistan train took place near Panipat in Haryana on February 18, 2007, when it was on its way to Attari in Amritsar, the last station on the Indian side.
Aseemanand, who was already out on bail, and three others, who were in judicial custody were present in the court here when NIA special Judge Jagdeep Singh pronounced the verdict.
Before giving the verdict, the Judge dismissed the plea filed by a Pakistani woman for examining some eyewitnesses from her country.
“The court ruled that the plea of the Pakistani woman was devoid of any merit, Malhotra said.
In Islamabad, the Foreign Office summoned the Indian High Commissioner to lodge a protest against the acquittal of all four accused. Pakistan said 44 of the victims were its nationals.
In the past, Islamabad has used the case as a counter to India’s charge that Pakistan harbours terrorists.
The blast had ripped apart two coaches of the cross-border train.
The Haryana police registered a case, but the probe was handed over to the NIA in July 2010.
The NIA filed a charge sheet in July 2011 against eight persons for their alleged roles in the terror attack.
Of the eight, Swami Aseemanand, Lokesh Sharma, Kamal Chauhan and Rajinder Chaudhary appeared before the court and faced trial.
Sunil Joshi, the alleged mastermind of the attack, was shot dead near his home in Madhya Pradesh’s Dewas district in December 2007.
The three other accused — Ramchandra Kalsangra, Sandeep Dange and Amit — could not be arrested and were declared proclaimed offenders.
The NIA had charged the accused with murder and criminal conspiracy, and under the Explosive Substances Act and the Railways Act.
Aseemanand’s counsel Mukesh Garg said, “The court has said that the NIA has failed to prove any of its charges against the accused and the evidence against them was treated as not sufficient. Therefore, the court acquitted them.”
There were 299 witnesses in the case and 224 of them were examined.
“There was not one witness who identified the accused, Garg further said.
“The accused were implicated in this case under a conspiracy, he added.
Momin Malik, the counsel for Pakistani woman Rahila Wakeel, said he was expecting that the court would defer the matter to the next date even if the plea of his client stood dismissed.
He said he will discuss the verdict with his client before deciding the next course of action.
According to the NIA charge sheet, the accused were upset with terror attacks on Hindu temples – Akshardham (Gujarat), Raghunath Mandir (Jammu) and Sankat Mochan Mandir (Varanasi).
They then conspired to seek “revenge”, the NIA argued.
The NIA had claimed the accused were given training in Madhya Pradesh and Haryana’s Faridabad for making bombs and firing pistols.
The NIA charged that Sunil Joshi had planned the attack and the suitcase bombs were planted by Lokesh Sharma, Kamal Chauhan and Rajinder Chaudhary and Amit.
The Samjhauta Express blast was one among the series of three bombings in 2007, with Aseemanand being an alleged link between them. On May 18 that year, a blast in Hyderabad’s Mecca Masjid killed nine people. In October, an explosion in Ajmer’s famed Khwaja Chishti shrine claimed three lives.
Wednesday’s acquittal is his third.
In March 2017, he was absolved in the Ajmer case and in April last year, he was acquitted in the Mecca Masjid case. (PTI)