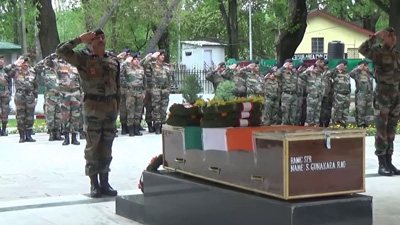 Click here to watch video
Rao sustained bullet injuries during the fierce operation at Khudwani early today. He was provided immediate first aid and evacuated to 92 Base Hospital but he succumbed to injuries, the spokesman said.
General Officer Commanding of Chinar Corps, Lt Gen A K Bhatt, led all ranks in paying homage to the soldier on behalf of the nation.
“In a show of solidarity, representatives from other security agencies also joined in paying their last respects to the martyr,” he said.
Rao (24) had joined the Army in 2012 and belonged to Atisurikaviti village of Srikakulam district in Andhra Pradesh. He is survived by his parents.
” The mortal remains of the martyr were flown for last rites to his native place, where he would be laid to rest with full military honours,” the spokesman added.