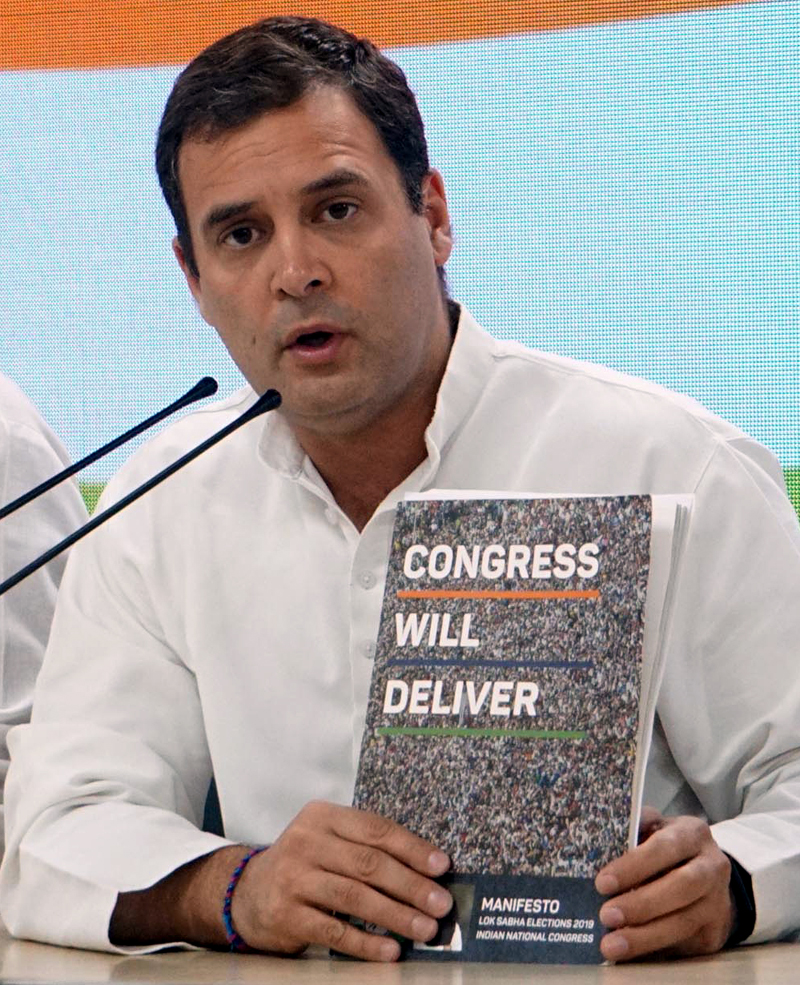 NEW DELHI, May 4: Taking the BJP’s nationalism narrative head-on, Congress president Rahul Gandhi today said the Indian Army is not Prime Minister Narendra Modi’s “personal property” and accused the saffron party of compromising in dealing with terrorism, citing JeM chief Masood Azhar’s release during the previous NDA rule.
Asserting that terrorism is a huge issue, he said the Congress will deal with it “more sternly” than Modi and alleged that the BJP was using the armed forces for political mileage.
Gandhi, while addressing a press conference at the party headquarters here, said Modi insulted the Army by saying UPA’s surgical strikes were video games.
His attack on Modi came a day after the Prime Minister said the Congress conducted surgical strikes only “on paper” and the leaders of the opposition party thought those were akin to video games.
It was a BJP Government that had released Azhar and sent him to Pakistan, Gandhi said.
“Who had sent him to Pakistan? He is being designated, but who sent him there in the first place? How did he reach Pakistan? Has the Congress party sent him to Pakistan? Which Government had negotiated with terrorism, bowed in front of terrorism, who sent him back?,” he asked, alluding to Azhar’s release in the Kandahar hijacking case during the NDA rule in 1999.
“The Congress did not send him (Azhar) back. The reality is that the BJP compromises (with terrorism). The Congress has never done such a thing. The Congress party has never sent a terrorist to Pakistan and will never do so,” Gandhi, who was flanked by senior Congress leaders P Chidambaram, Ahmed Patel, Anand Sharma and Randeep Surjewala, said.
Azhar and two other terrorists — Mushtaq Ahmed Zargar and Ahmed Omar Saeed Sheikh — were released by the then Atal Bihari Vajpayee-led Government in exchange for the passengers held hostage on board Indian Airlines flight IC-814, which was hijacked to Kandahar in Afghanistan.
Then Foreign Minister Jaswant Singh had accompanied Azhar in a special aircraft and National Security Advisor (NSA) Ajit Doval, then a top Intelligence Bureau (IB) official, was in Kandahar as part of India’s negotiating team when the terrorists were handed over.
On the Prime Minister invoking Masood Azhar’s designation as a global terrorist by the United Nations Security Council (UNSC) at a poll rally soon after the decision was announced, the Congress president said the Jaish-e-Mohammed (JeM) chief is a terrorist and the strictest action should be taken against him.
Gandhi also accused the Bharatiya Janata Party (BJP) of taking credit for the Army’s actions and ignoring key issues such as unemployment and agrarian distress.
“Modi thinks the Army, Navy and Air Force are his personal property,” he said.
Referring to the six surgical strikes the Congress had listed as carried out under the UPA rule, he said those were not conducted by his party, but by the Army.
“When he (Modi) says the Indian Army’s surgical strikes were video games, he does not insult the Congress, but the Indian Army.
“The Army had done this (surgical strikes). It is their job. We do not politicise the Army. It is the Indian Army, not a particular person’s Army. The Prime Minister should have that much of respect and not insult the Army,” the Congress chief said.
He said the Army was doing its job for 70 years and had won every battle.
“It is a terrific record. What does Modi have to do with it as it is the Army’s job. Modi should tell the country what is he doing for the youth, what is he going to do for farmers, for women,” he said.
Gandhi also said there was a clear-cut feeling after four phases of the Lok Sabha polls that the BJP was losing the electoral battle. (PTI)