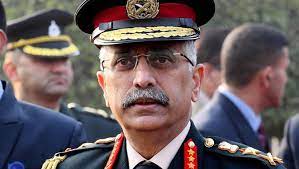 SAMDOH (HP), June 11: The Indian Army chief, General Manoj Pandey, is on a three-day visit to areas bordering China and went Samdoh in Himachal Pradesh’s Kinnaur district, the last place on the Indian side with the Chinese border.
The General met soldiers and officers posted there and talked to them on Friday, an official spokesman said.
He then left for Dehradun. This is the first visit to the sector since he took charge of the Indian Army.
During his visit to the forward posts, the Army chief was briefed by the local commanders about the situation along the border. The General inquired about the deployed formations and long range patrolling.
Interacting with the Army Commanders, he stressed the need for vigilance on the borders.
(UNI)