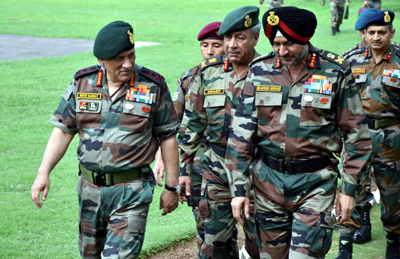 Excelsior Correspondent
JAMMU, July 14: Army chief Gen Bipin Rawat today reviewed security situation  on the Line of Control (LoC) along Pakistan with top Commanders including Northern Command chief Lt Gen Ranbir Singh at Akhnoor Brigade. The military preparedness on the borders as well as the challenge of militancy also figured in the meeting.
Sources told the Excelsior that Gen Rawat chaired the strategic meeting of top Army Commanders including Lt Gen Ranbir Singh, General Officer Commanding (GOC), Nagrota based 16 Corps Lt Gen Saranjeet Singh, Maj Gen MK Mago, GOC Crossed Swords Division and GOCs other Divisions and Formation Commanders, which reportedly discussed series of issues including preparedness of troops on LoC with Pakistan in twin border districts of Rajouri and Poonch and parts of Jammu district, thwarting the infiltration attempts and other security related issues including sniping incidents, two of which have been reported during the past one week, the latest one being today.
Click here to watch video
The Northern Command chief, who had recently undertaken three-day security review tour of the Kashmir valley, reportedly gave detailed briefing to the Army chief on the prevailing situation on both LoC as well as hinterland in Jammu and Kashmir and steps being taken by the Army to counter infiltration attempts.
However, according to sources, major part of security review meeting was confined to LoC in Jammu sector, which starts from Akhnoor and goes up to Pir Panjal ranges covering entire Sunderbani, Nowshera, Rajouri, Keri, Manjakote, Poonch, Krishna Ghati, Mankote, Mendhar and Balakote sectors of twin border districts of Poonch and Rajouri, which had been very active during the past one year but in the last about one and a half months, the LoC in these two districts has been reasonably normal excepting sniper shot incidents.
In fact, only this morning, an Army soldier was injured in a sniper shot by Pakistani troops in Khour sector of Akhnoor tehsil. This was second injury in sniper shot in less than a week on the LoC in Jammu region.
The Army chief, apart from operational preparedness, prevailing security situation, also reviewed the actions being undertaken to ensure a robust and effective Counter-Infiltration Grid along the LoC with Pakistan in twin border districts of Rajouri and Poonch and parts of Jammu district including Akhnoor, Khour and Pallanwalla.
The Chief of Army Staff also reviewed the measures and Standard Operating Procedures (SOPs) instituted and being followed by the units and formations and called upon them to keep strict surveillance in their areas of operations to ensure zero infiltration on the LoC in Rajouri and Poonch districts, where hardly any successful intrusion bid has been reported by the militants though there were reports that large number of terrorists were camping at launching pads along Pakistan side of the LoC to sneak into this side at an opportune time.
On some of the occasions previously, Pakistan army had also given covering fire to the militants for infiltration by resorting to ceasefire violations but alert troops had thwarted all such infiltration attempts and ensured that the militants didn’t succeed in their nefarious designs.
Gen Rawat commended the Field Commanders for ably confronting the challenges posed by the inimical elements and complemented them for their professionalism and selfless commitment. He exhorted all ranks to continue to work with same zeal, enthusiasm and dedication to overcome the challenges.
Sources said the troops have been asked to maintain high degree of alert on the LoC as there were reports that Pakistan army could facilitate infiltration attempts into Jammu and Kashmir ahead of general elections in Pakistan scheduled for July 25 to give political benefits to a particular party.
Meanwhile, a soldier was injured when he was reportedly shot by a Pakistani sniper from across the Line of Control (LoC) in Khour sector of Akhnoor tehsil in Jammu district, bordering Sunderbani area of Rajouri district.
The incident took place when the soldier was manning a forward post in Akhnoor sector’s Khour area, sources said.
He suffered a bullet injury in his upper body area. The soldier was shifted to the Command Hospital in Udhampur after initial treatment at the local military hospital.
He was reportedly injured in firing by a Pakistani sniper, sources said.
This is the second such incident in a week on the LoC. On July 7, an Army jawan was injured reportedly in Pakistani sniper firing in Rajouri district’s Nowshera sector.
As many as 52 people, including 24 security personnel, were killed and scores of others, mostly civilians, injured this year in more than 1,250 ceasefire violations by Pakistan along the LoC and International Border.