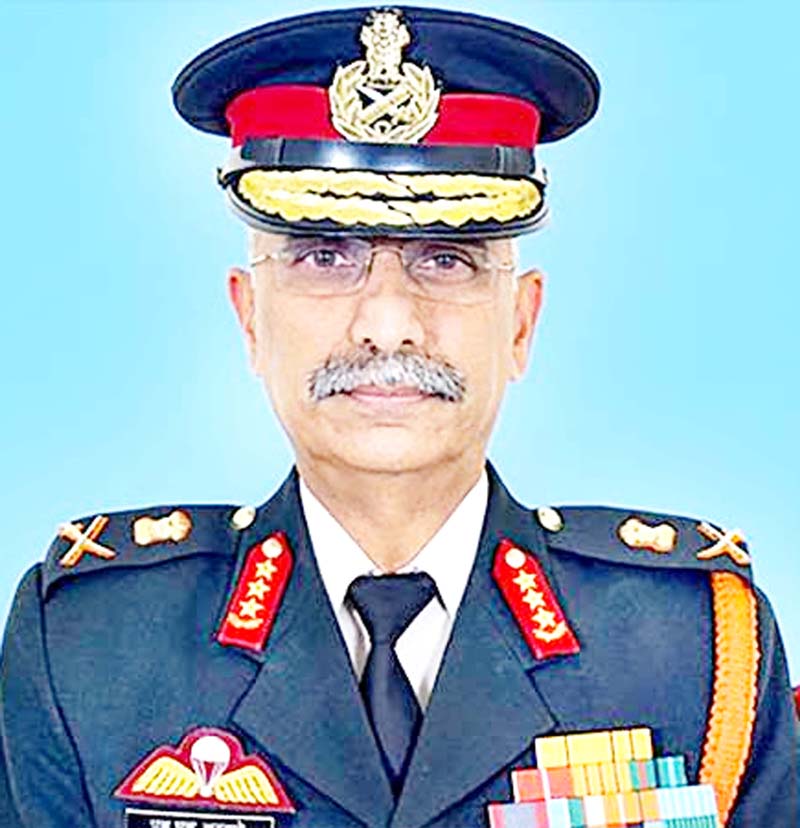 JAMMU, Jan 22: Army chief Gen Manoj Mukund Naravane today held first high-level review of security situation in Jammu and Kashmir with top brass of Army at Northern Command Headquarters as he arrived on his first visit to the Union Territory after taking over as the Chief of Army Staff (COAS) from Gen Bipin Rawat on December 31.
Gen Naravane will address the troops at Northern Command Headquarters in Udhampur tomorrow morning. Troops in 16 Corps of Nagrota and 15 Corps of Jammu will be addressed simultaneously through video conferencing. He is also scheduled to tour the Line of Control (LoC) with Pakistan in Rajouri district and will meet Lieutenant Governor Girish Chandra Murmu before returning to New Delhi tomorrow evening.
Operational preparedness of the troops on the LoC with Pakistan in Jammu and Kashmir, which was tense post August 5 abrogation of special Constitutional provisions of Jammu and Kashmir and bifurcation of the erstwhile State into two Union Territories of J&K and Ladakh, security scenario and anti-militancy operations in the Union Territory especially the Kashmir valley and review of various other defence related issues was high on agenda of Gen Naravane’s first meeting to J&K.
Prior to J&K visit, the new Army chief had visited Siachen Glacier, the highest battlefield in the world located at the height of over 18,500 feet from sea level, on January 9, in the Union Territory of Ladakh.
Soon after his arrival at Northern Command Headquarters in Udhampur, Gen Naravane was briefed by the top Army Commanders on the security situation in Jammu and Kashmir and tension with Pakistan on the LoC, including Northern Command chief Lt Gen Ranbir Singh.
Apart from security situation in Jammu and Kashmir and anti-militancy operations in the Valley, sources said frequent ceasefire violations by Pakistan army on the LoC in twin border districts of Rajouri and Poonch, Uri and other sectors in the Valley and infiltration attempts by the armed militants under the cover of firing by Pakistan will be reviewed by the Chief of Army Staff.
Sources said the Army chief will address the troops at Northern Command Headquarters in Udhampur, which will be his first after taking over the Chief of Army Staff. Significantly, the address of Gen Naravane will be delivered at 16 Corps Headquarters in Nagrota and 15 Corps Headquarters in Srinagar to the Army soldiers through video conferencing simultaneously.
The Army chief will visit 16 Corps Headquarters in Nagrota and then the forward areas along the Line of Control in Rajouri district.
On the LoC, Gen Naravane will get brief on the situation prevailing there from the field commanders. He will also interact with the field commanders as well as Army soldiers and boost their morale.
It may be mentioned here that Pakistan army has been frequently resorting to ceasefire violations along the LoC especially in Rajouri and Poonch districts since August 5 Central decisions by directly targeting the civilian areas. In strong retaliatory action by the Indian troops, Pakistan army has suffered heavy casualties and infrastructural losses.
“Under the cover of ceasefire violations, Pakistan army has also been trying to push groups of trained militants of Lashkar-e-Toiba (LeT) and Jaish-e-Mohammed into the Indian territory,” sources said, adding that almost all such infiltration attempts have been foiled by the alert Army.
However, there was no let up in ceasefire violations and infiltration attempts by the militants, sources pointed out.
Tomorrow afternoon, Gen Naravane is scheduled to meet Lieutenant Governor of the Union Territory of Jammu and Kashmir Girish Chandra Murmu for comprehensive review of security situation in the UT especially the Valley and roadmap ahead.
There have been reports that security forces planned to step up anti-militancy operations in the Valley which had taken a hit after August 5 Central decisions as the focus of security agencies had shifted to maintenance of law and order.