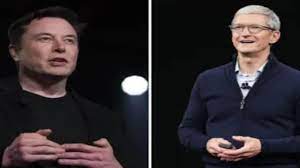 Washington, Dec 1: Apple CEO Tim Cook never considered removing the social media platform Twitter from its App Store despite prior reports that the tech giant was threatening to do so, Twitter chief Elon Musk said.
Good conversation. Among other things, we resolved the misunderstanding about Twitter potentially being removed from the App Store. Tim was clear that Apple never considered doing so, Musk said on Wednesday after a meeting at the Apple headquarters.
On Monday, Musk said that Apple threatened to remove Twitter from the App Store, which would make the platform inaccessible to a significant share of the mobile phone market.
Speculation about Twitter’s removal from the App Store was fueled by reports that Apple executive Phil Schiller was leaving Twitter in the wake of Musk’s reform of the social media platform.
Musk acquired Twitter in October, vowing to bolster protections for free speech. The company has since reinstated many previously suspended accounts, including those of former President Donald Trump.
Musk said he will create a new smartphone if Apple or Google remove Twitter from their application stores.