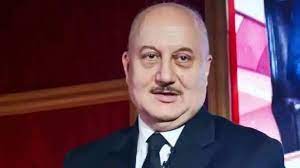 NEW YORK, Sept 19: Renowned actor Anupam Kher has been conferred with an honorary doctorate in Hindu studies by the Hindu University of America.
The Florida-based university conferred upon Kher the Degree of Honorary Doctor of Philosophy in Hindu Studies at a special event here on Saturday.
“I feel humbled and honoured to receive this doctorate. It will have a very prestigious place and will always be one of the major highlights of my life. The doctorate will give me a platform to talk about the philosophy of Hinduism, the philosophy of the oldest culture in the world,” Kher told PTI.
When the Hindu University of America approached him for the honour, the 66-year-old actor said he wanted to accept the award.
“First of all, the kind of work that people are doing over here in the field of education, especially the teachings of Hinduism that I believe in and have grown up with, I thought it was an honour that I had to accept,” he added.
While in the US, Kher also travelled to several cities with his new show ‘Zindagi Ka Safar’, in which he has lively interactions with the audience.
The actor said he had a “feel good” and “therapeutic experience” with the show, particularly as the COVID-19 pandemic forced people to stay at home and curtailed face-to-face interactions.
Kher, who also shot for his film “Shiv Shastri Balboa” in the country, met several Indians and discovered that after the disruption caused by the pandemic, people have this great need to communicate.
He said he felt that it’s important to have social interactions “to celebrate life all over again, to spread the message of hope because according to me, hope is the heart of life.”
Kher said he had not planned how the show ‘Zindagi Ka Safar’ would pan out.
“The whole idea of the show was basically to reach out to people and tell them it is fine, everything will be fine. It was therapeutic for me and it was therapeutic (for the audience).
“I had no idea what I was going to do. So I told them my life story, played ‘antakshari’ with them. I was making fun of myself the most, telling them about my childhood days. It was basically a feel-good experience,” he said, adding that his “Shiv Shastri Balboa” co-star Jugal Hansraj coordinated the show.
Kher has been getting offers to take the show to other cities in the US and around the world, he shared.
“The show worked very well because people were wanting to hear somebody with an experience, people were ready to talk with somebody who had a sense of humour. It was not just a show, it was a therapy with a lot of laughter and some tears also.”
Even during the pandemic, Kher has been busy and has done three films, including “The Last Show” and “Kashmir Files” and also wrote a book.
“Sometimes you have to be an example and not let the circumstances of life bog you down. You need to reinvent yourself as a person,” he said.
Recalling his father’s teachings, the actor said “failure is an event, never a person”.
“When you are faced with a situation where you say there’s a fear of failure, let me push my boundaries, you discover that you have the courage, you have the strength and you can look for new horizons.
“At this stage of my life, I think I’m much more successful as a person. I know my flaws, I can work on them. I know my plus points and I can enhance them. I understand life. I don’t carry the burden of Anupam Kher on my shoulders. The lighter I am, the higher I go.”
Post his return to India, Kher will start shooting for his next film “Oonchai” with filmmaker Sooraj Barjatya. (PTI)