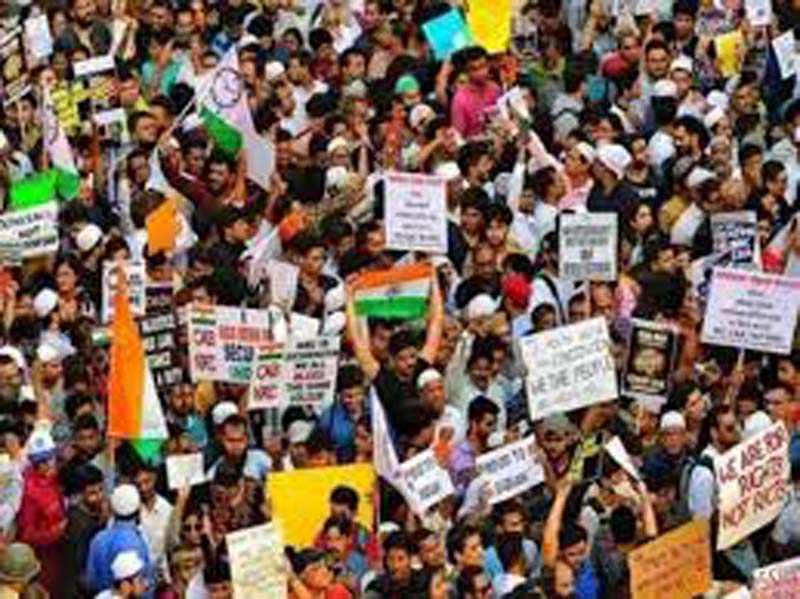 NEW DELHI, Jan 24: A group of 154 “conscious, responsible and concerned citizens” on Friday urged President Ram Nath Kovind to take action against those indulging in violence in the name of protests against the CAA and the NRC and “safeguard” the country’s democratic institutions.
The group consists of people who have retired from top government and constitutional posts and intellectuals.
Central Administrative Tribunal (CAT) Chairman and former chief justice of Sikkim High Court Permod Kohli, who led the delegation that called on the President, alleged that some political elements were sponsoring the “violent protestors” and there is also an “external dimension to the disturbances being created”.
He, however, did not name any political party or individual “instigating” the protests against the Citizenship (Amendment) Act, the National Population Register and the National Register of Citizens
The delegates said they were concerned about the move to “divide” the country by “some groups” to create a “vicious atmosphere”.
We have no objection if the stir is peaceful without any inconvenience to the public, they added.
The signatories to the memorandum, submitted to the President, include 11 former high court judges, 72 ex-bureaucrats including IAS, IPS, IFS officers and former ambassadors of India, 56 ex-top defence officers, intellectuals, academicians and medical professionals.
The memorandum said the “conscious, responsible and concerned citizens” want the Centre to “look into the matter with all seriousness and safeguard the democratic institutions of the country and take stern action against such forces”.
“Whenever India faced challenges on its borders and encountered the onslaught of some of the foreign invaders, it was more because of internal chicanery of individuals and small groups of people for their personal agendas and benefits who have from time to time tried to break the fabric of India’s unity and cohesiveness. We are seeing this phenomenon again.”
It alleged that the protests, “while ostensibly claiming to oppose the policies” of the Centre are in effect “designed to destroy the very fabric” of India and harm its unity and integrity.
“The fear-mongering which is being spread across the length and breadth of India appears to be motivated and with a sinister design to harm the nation,” the memorandum added.
“The CAA does not impact on Indian citizens and hence claims that a citizen’s rights and liberties are being infringed, does not stand scrutiny,” it said.
Others signatories include former Rajya Sabha secretary-general Yogendra Narain, former Kerala chief secretary C V Anand Bose, former ambassador G S Iyer, former RAW chief Sanjiv Tripathi, ITBP ex-DGP S K Kain, former Delhi Police commissioner R S Gupta, former Army staff deputy chief N S Malik, ex-president Institute of Cost Accountants of India Chandra Wadhwa and former NCW chairperson Lalitha Kumaramangalam. (PTI)