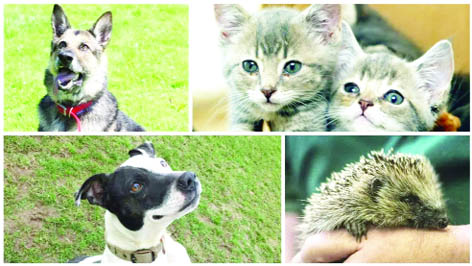 Mehak Khajuria
Animal cruelty has long been recognized and pervasive.In this day and age,animal neglect or intentional acts of violence against animalscontinues to exist all across the globe.Due to the cruelty inflicted the animals experience agony, torture& distress.
Animal cruelty is the abuse towards or neglect of an animal. It is not just limited to industrial or domesticated animalsalone, it happens every day& everywhere, even to domestic pets. It is not uncommon to come across news reports of some pet owners mistreating their pets, kicking, beating, abandoning the helpless animals and some of thepets spend their entire lives in a negligentstate of affairs. They eventually die of dehydration, malnutrition, untreated diseases, or other conditions.
The cruelty and mistreatment towards silent, voiceless animals extend beyond the boundaries of cities, towns and villages and into the laboratories. It is estimated that each year, more than 100 million animals- mice, rats, frogs, dogs, cats, rabbits, hamsters, guinea pigs, monkeys, fish, and birds-are killed in U.S. laboratories for biology lessons, medical training, curiosity-driven experimentation, and chemical, drug, food, and cosmetics testing. Before their deaths, some are forced to inhale toxic fumes, others are immobilized in restraint devices for hours, some have holes drilled into their skulls, and others have their skins burned off or their spinal cords crushed. In addition to the torment of the actual experiments, animals in laboratories are deprived of everything natural and important to them-they are confined to barren cages, socially isolated, and psychologically traumatized. The thinking, feeling animals who are used in experiments are treated like nothing more than disposable laboratory equipment.
The exploitationof animals for entertainment seems to be a thriving business.Animals are used as props in circuses, treated as objects in the zoos & aquatic theme parks etc. Animals are deprived of their natural habitat but are forced to stay inconfined spaces. They’re transported from city to city in the tinycages and cruel, barbaric methods are used to train them fordangerous performances, which more often than notresults in chronic pain, lost body parts, and other shocking & abysmal consequences.
Many a time animals are victimized for monetary gain such as selling of furs, pelts & stealing body parts from animals to sell as jewellery.
Another aspect of animal cruelty which has come to the fore during this pandemic is meat markets and the unscrupulous conditions prevailing therein. Chickens, cattleand other livestock are confined in small places with unhygienic and unhealthy conditions, often injected with growth hormones, impregnated forcefully.They are covered in their own excreta. They are forced to stay standing on a hard concrete floor in poorly ventilated and dark enclosures. The illegal world ofbullfighting, cockfighting, dogfighting, though not unknown to all (even the authorities) is amongst the most appalling & gruesomefacets of animal cruelty, to pit the animals against each other.
However, there has been a shift in the paradigm and people, globallyare standing against the cruelty inflicted on the animals. The Cambridge Declaration on Consciousness of 2012, saw a prominent group of scientists gather together at Cambridge University, where they declared that animals are conscious like us. As more people become aware of animal cruelty, we’ll have more power to stop it.It’s critically important to advocate for better animal protection laws with lawmakers in all government bodies.
Belowis the lowdown on legislation in relation to Animal Welfare globally. There are only a handful of animal protection laws:
New Zealand: Animal Welfare Legislation Recognizes Animals as Sentient, Bans Cosmetic Testing
On May 5, 2015, the New Zealand Parliament unanimously passed the Animal Welfare Amendment Act (No. 2) 2015, which includes an amendment to the long title of the principal legislation, the Animal Welfare Act 1999, in order to specifically recognize animals as sentient.
Switzerland: Recognition of animal sentience and prohibition of animal suffering
According to international standards, Switzerland has higher levels of animal welfare and protection in comparison with other countries. The Animal Welfare Act of 2005 protects the welfare and dignity of animals. Activities that are deemed degrading to the dignity of animals are forbidden and include suffering, infliction of pain, harm, or exposure to humiliation or anxiety. The country was awarded a Grade A from World Animal Protection in 2014.
India
Article 51A(G) of The Constitution of India places a duty on every citizen to “protect and improve the natural environment including forests, lakes, rivers and wildlife, and to have compassion for living creatures.”
The Prevention of Cruelty to Animals Act (PCA) was passed in 1960. In 2001, rules pertaining to performing animals in circuses and movies, slaughterhouses, animal birth control, and the setting up of societies for the prevention of cruelty to animals (SPCA) were passed. In 2017 and 2018, rules on the regulation of shops that sell animals as pets, dog breeders, and livestock markets were passed.
IPC Sections 428 and 429: To kill or maim any animal, including stray animals, is a punishable offence.
ABC Rules, 2001:Stray dogs that have been operated for birth control cannot be captured or relocated by anybody including any authority.
Rule 3, Slaughterhouse Rules, 2001: Animal sacrifice is illegal in every part of the country.
Section 11(1)(m)(ii) and Section 11(1)(n), PCA Act, 1960: Organizing of or participating in or inciting any animal fight is a cognizable offence.
Severalstateshavepassed and are enforcing animal rights dictum and prevention of animal cruelty regulations. Nevertheless, we further need to set up Animal Welfare boards in every district and Zonal Animal Protection Centres to take all such steps as the Centres may think fit to ensure tohelp prevent such acts ofcruelty against animals.
Although several laws have been framed for the protection and welfare of animals, the protection and safety of animals depend much more on the outlook and approach of the human race towards them. The safety and welfare of voiceless and silent animals have to be protected as this planet, is as much theirs as ours.
(The author is a Delhi based Lawyer)
feedbackexcelsior@gmail.com